How to use certified lifecycle analyses in PVC-free signage

What processes do you use to show positive lifecycle analysis (LCA) for Kavalan?

The lifecycle assessment (LCA) simply provides raw numbers for a number of environmental impacts. There are no positive or negative LCAs – they just show the unedited impact a product has on the planet and humanity. These numbers can then be used to compare with the impact of other products.

LCAs are performed as per ISO 14040:2006 (Environmental management. Life cycle assessment – Principles and framework) and ISO 14044:2006 (Environmental management. Life cycle assessment – Requirements and guidelines). These standards are part of the ISO 14000 set of standards created to help companies around the world reduce their adverse impact on the environment.

LCAs can only be performed by a small number of certified bodies, including Swiss-based SGS (formerly Société Générale de Surveillance (French for General Society of Surveillance)) who are the largest and most respected inspection, verification, testing and certification service in the world. 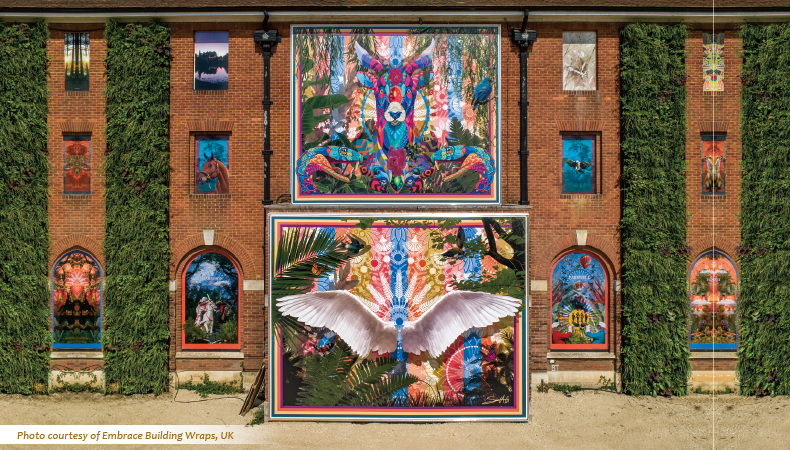 LCAs underpin environmental policy throughout the Western world, especially in the EU, UK and North America, where footprints for certain impacts such as CO2 equivalent emissions and water consumption are assessed across a whole range of products. The latest environmental legislation currently underway throughout the EU, UK, Norway and Switzerland will make it compulsory for LCAs to be conducted on all products and services related to construction and certain manufacturing industries.

How do you stand out in a market full of greenwashing?

As Steve Lister states in Kavalan’s PVC-free pledge for the planet, “Greenwashing is prevalent throughout the entire plastics industry.” We agree, especially in the single-use signage banner industry.

In a nutshell, if you want to compare a product’s impact on the planet, simply ask for its certified LCA numbers. If they don’t have them, then any environmental claims made by the manufacturer can be regarded as greenwashing. 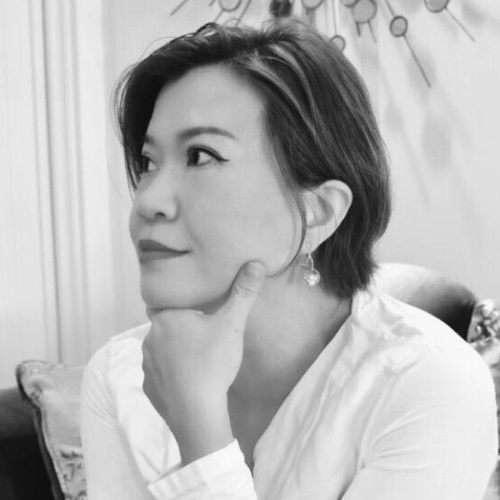 
If we are to take claims such as 100% recycled content, recyclable, etc. for granted, we need to view them with caution.

For the claim of 100% recycled content in a signage banner, currently only clear plastic beverage bottles are used, and we’re pretty certain these are not 100% content as claimed.

Even when 'upcycling' a beverage bottle (resin code 1) back into another beverage bottle, additives are used to regain the original physical and colour characteristics of the original bottle – as to the discussion regarding whether these 'additives' are considered in the 100% recycled content claim is currently being processed through the US courts with an increasing number of law suits against some very well-known food and beverage producers and retailers – watch this space! 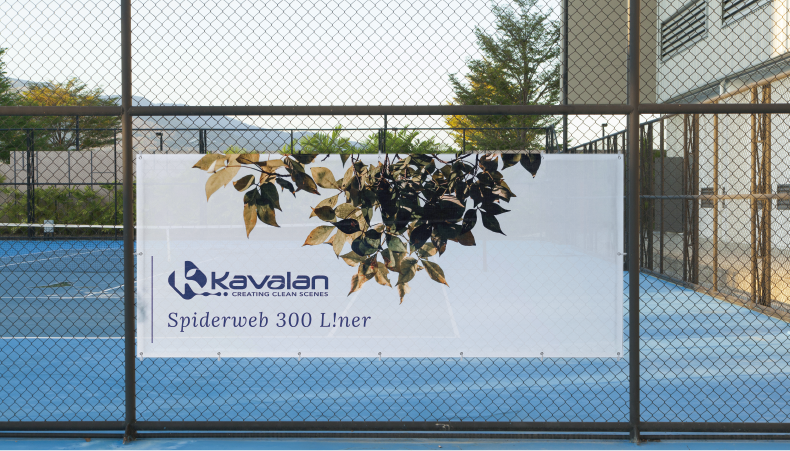 We are certain that, to downcycle resin 1 code clear beverage bottles into textiles, we know from our own R&D into early Kavalan substrates that significant virgin materials and additives have to be added to make a material with comparable strength and durability characteristics, thereby negating any of the positive environmental impacts from the recycling. So, in our opinion, they cannot be considered 100% recycled content.

Furthermore, as far as we are aware, no certified LCAs have been completed on any single use signage banner material containing 100% recycled content. Why is this the case? If I had such a so-called 'green' material, performing an LCA and shouting out its super green results would have received the highest priority. 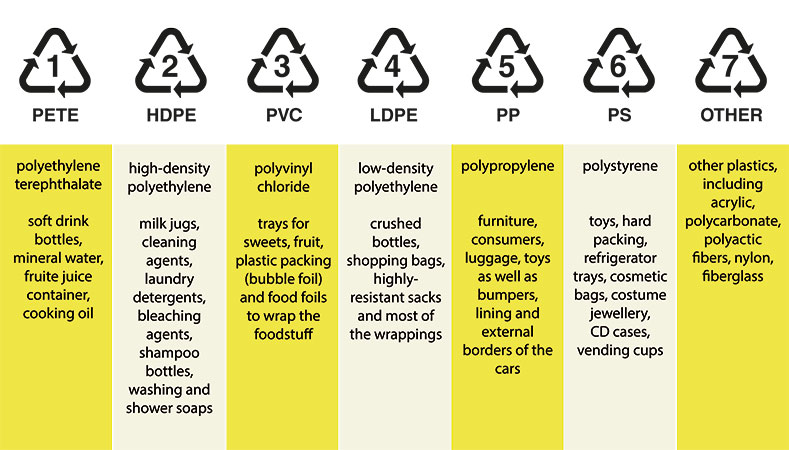 
The word 'recyclable' is very controversial, which is why Kavalan uses it in a contextual sense only. Again, according to an increasing number of lawsuits in the US and future legislation in Europe, companies are being challenged on their claims that their products are recyclable, especially 100% recyclable. Simply put, if there is no infrastructure to fully recycle the product, it cannot be recyclable and is considered greenwashing! For the signage banner industry this is definitely the case: there is no municipal curbside recycling of signage banners and there are only a few private recycling schemes, whose definition of recycling is questionable at best.

Other claims the that PVC (vinyl) coating on a signage banner can be recycled or recovered is also greenwashing. There are currently no commercial methods for chemical or mechanical recycling or recovery of PVC (vinyl) coatings and the dozens of toxic phthalates contained within. Any claims to the contrary must be considered with suspicion.

With the amount of R&D and research that we have done over the years, we know that the creation of more sustainable materials is not an easy path, but at Taya, we will continue to educate and communicate the correct message, even if we are labelled rebels.

It is an industry first for Kavalan to have an entire range of materials to have the eco credentials fully assessed and proven by the certified LCA process? Can you tell us more about this?

The LCA assesses a product’s impact on 18 of the most critical environmental impacts, including global warming, water consumption, fossil fuel and mineral resource scarcity, ecotoxicity and air pollution among others.

The assessments are based on the environmental impact of a product throughout its entire life. From raw material extraction, processing and production to the production and packaging of the final product, its transportation and end-of-life disposal. Again, Steve gives some great insight into this in Kavalan’s PVC-free pledge for the Planet – Ep.2 video.

For Kavalan, LCAs were performed alongside comparative PVC and textile products so that a true comparison can be made regarding the impact of each material. This is how Kavalan can make the claims of a greener material when compared with its PVC and textile signage banners counterparts. 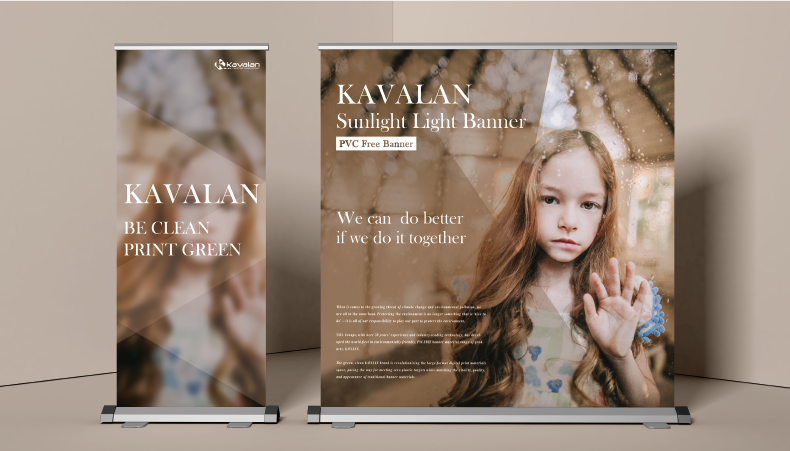 What methods are being prototyped to recycle rather than incinerate banner material?

Again, to reiterate the point made earlier, the signage banner industry has no circular economy, no municipal curbside recycling, and so on, so the vast majority of materials are simply being thrown away. As a footnote to this, PVC banners also use a polyester substrate.

Also, as stated earlier, there are no commercial chemical or mechanical recycling and recovery of the coatings on signage banners and these will be either incinerated or landfilled. The great thing with Kavalan is when landfilled, the biodegradable coating will simply breakdown into basic carbon, oxygen, water vapour and biomass compounds.

In terms of overall plastics recycling, even the EU admits that less than 2% of plastics recycling (mainly resin code 1) is considered 'closed loop', with the rest only being recycled once (or several times if supplemented with virgin materials) before being disposed of.

That said, some of Kavalan’s customers are attempting to recycle Kavalan’s polyester substrates into downcycled fillers and composites for a variety of household and industrial goods. Since there are no toxic residues from the coating, processing Kavalan in this way is proving less intensive (and cheaper) than for PVC and PP textile banners.

We also have several customers considering using Kavalan’s coating for biodegradable garden accessories and we have one customer researching the prospect of using just the natural clear acrylics in the coating for high-strength security and safety shields.

It’s early days, but we are working with our customers and partners alike in an attempt to fully reuse or recycle all of Kavalan products.

How can printers use the Kavalan eco calculator?

Our customers can approach their local Kavalan distributor for a comparison from our eco calculator and they will issue a PDF confirming the eco reductions or a given amount of that material. If a printer is unsure who their nearest local distributor is, they can simply contact us at hello@goforkavalan.com and we’ll pass on their details. 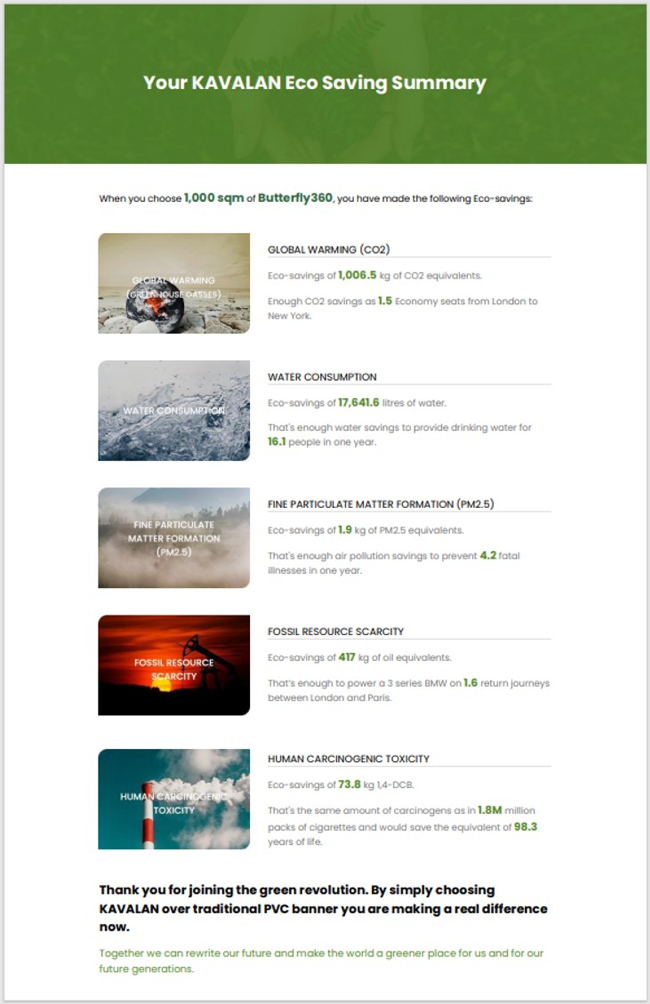 What is next in the pipeline for Kavalan products?

Going forward, we see no improvement in the overall recycling strategy (or attitude) for the signage banner industry, and let’s face it, why should it? PVC banners are very established and cheap, so why would businesses change, even when they know failing to do so is at the cost of the environment? So Kavalan will keep using the LCA data to continue to improve and create the most environmentally friendly signage banners available.

The younger generations are very concerned about the future of our planet and the environmental impacts on their families and friends alike. Our young and well-educated international teams throughout Asia are obsessed with overturning this ‘old guard’ attitude of a throw-away society and want to make a positive difference.

We now have a biodegradable PVC-free coating which has had a flawless record over the past five years.

Our R&D departments are working on several alternative substrate materials: the first is the one used on the newly released revolutionary Moonlight River textile replacement, where the polyester yarn production process has eliminated the entire freshwater intensive dying and washing stages, and reduced freshwater use by 67% when compared to its textile counterpart. This makes the yarn even greener than so called 100% rPET yarns, without compromising the strength and coating adhesion properties associated with Kavalan.

Another approach our teams in Shanghai and Tainan (Taiwan) have taken is to make the entire banner biodegradable, and for this we’re very excited to announce the future release of Sunlight ZeRo, a fully biodegradable signage banner which has Kavalan’s PVC-free coating and a fully biodegradable base substrate … and of course eco credentials fully supported by a certified LCA.

For some mesh applications, liners are essential, and these have typically been PVC resin based. However, Kavalan will soon release a PVC-free liner to complement its Spiderweb 300 mesh banners. The PVC-free liner is another industry first. Apart from being more eco friendly, it is lighter and it also helps overcome some of the technical difficulties that signage and printing companies might encounter when printing on PVC mesh banners using Latex printers.

How industry innovation has continued to blossom during lockdown and after.

Have we got our sustainability priorities right? Q&A with Graeme Richardson-Locke

FESPA’s Head of Associations and Technical Lead, Graeme Richardson-Locke, talks to Chris Seekings about speciality printing communities and their journey to sustainability.

From the boardroom to the shopfloor, energy treasure hunts motivate entire workforces to contribute to your strategic energy management.

Christophe Aussenac on credibility and accreditation, and building a business around the new greener demands of customers.