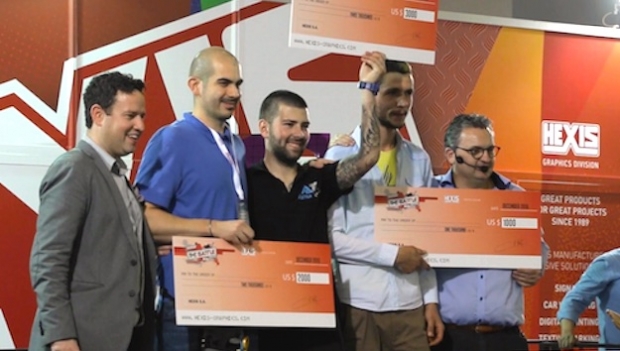 Ivan Tenchev of Bulgarian vehicle wrapping specialist Astra Folio has been named as the winner of the 2016 FESPA Eurasia Wrap Masters.

Supported by Hexis, the competition, which attracted major interest from across the region, took place at FESPA Eurasia, which ran from December 8-11, 2016, in Istanbul, Turkey.

The contest challenged entrants on the quality, speed, technique and creativity of their wrapping skills, with finalists facing off in a number of rounds at the event in Istanbul. However, Tenchev was able to see off competition from a host of competitors to become FESPA Eurasia Wrap Master Champion.

Speaking to FESPA about his win, Tenchev said that he is looking to build on this by entering the World Wrap Masters, the final round of which will take place at FESPA 2017 in Hamburg, Germany, from May 8-11. Tenchev is guaranteed a place in the grand final after his victory in Turkey late last year.

“Winning the 2016 FESPA Eurasia Wrap Masters and Hexis Battle was great for us and we are now hoping for more success at the World Masters in Hamburg in May,” Tenchev said.

“For us, the greatest reward from taking part is that that all the work that we do will be recognised by FESPA and visitors to the main FESPA show in Germany.”

Tenchev founded Astra Folio in 2010 with his wife and while the firm started out by only offering window-tinting services, the company has gone on to evolve into a provider of full vehicle wraps. In addition, Astra Folio has been able to expand its service offering outside of its native Bulgaria and into other countries across Europe.

“Last year was very successful for us and every year we have been in business has been good for us,” Tenchev said. “We now have three people that work for us, which gives my wife more time to look after our children.”

The FESPA World Wrap Masters Series is a collection of global events that have been designed to not only encourage, recognise and promote excellence in the vehicle wrapping community, but also allow specialist in this field of work to improve their skills within a live, competitive environment.

If you are interested in taking part, there is still time to join this year’s World Wrap Masters Series and possibly qualify for the World Wrap Masters Finals at FESPA 2017 in May, with a number of qualifying events scheduled over the next few months.

The Asia Wrap Masters competition takes place at FESPA Asia 2017, which is running from February 15-17 in Bangkok, Thailand, while Brasil Wrap Masters is set for March 15 at the FESPA Brasil event in Sao Paulo. The European Wrap Masters will take place on the opening day of FESPA 2017, prior to the World Wrap Masters Finals on May 11.

Wrap Masters Head Judge Ole Solskin talked exclusively to FESPA TV on the Hexis Battle ring about the wrap competition, his relationship with FESPA and his views on FESPA Eurasia 2016.

For more information on the FESPA World Wrap Masters Series and to register, please visit: www.wrapmasters.fespa.com