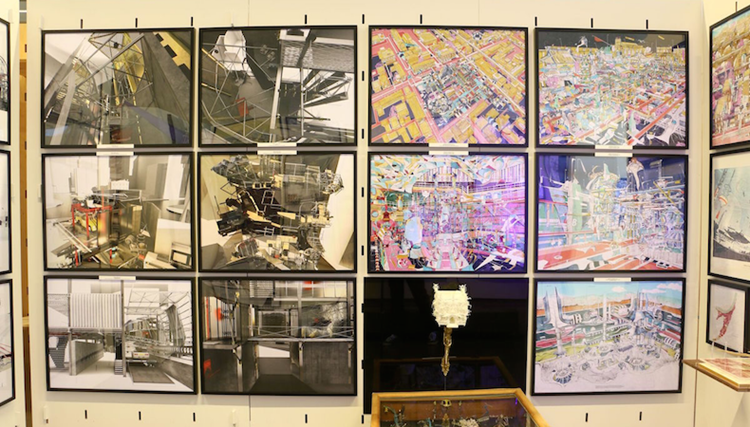 Students at the University of Greenwich have been making the most of its investment in two Canon Océ ColorWave 700s by using them to produce work for the annual exhibition or work.

“The exhibition took longer to take down than it did to print,” said Phil Hudson, technical team leader, University of Greenwich. “The Océ ColorWaves are fast, efficient and cost effective."

"Two years ago, ink was one of our biggest expenses and we needed to look at making an investment to reduce consumable costs. Since purchasing the Océ ColorWave 700s, we have significantly cut ink costs, increased production capacity and improved flexibility. Now students can be highly creative and produce work without worrying about the cost of going to an external print bureau."

“They also know they can complete their work quickly, easily and, at a quality that best showcases their work. Previously there would have been a bottleneck leading up to the show. This time there was still a queue but it was no-where near as long. Jobs that used to take 10 to 15 minutes took one to two minutes," Hudson added.

"Another plus for me was the speed at which it produced long banners. This meant there was virtually no outsourcing for this show either. There are six rollers which means we can run different substrates at the same time and work can just be sent to different queues. It is a rock-solid system.”

Bala Abdullahi, wide format account manager and technical documentation specialist at Canon UK, commented: “The University of Greenwich has taken the ColorWave technology and used it to take its student work to the next level. As a result, they have been able to produce a wide range of work from A3 to 3m banners on a variety of substrates.”

The ColorWave 700 caters for businesses requiring a higher print volume, including reprographics, sign and display printers and in-house printing applications in industries such as retail, hospitality, POS, education and government.

The system supports media up to 0.8mm thick, which makes it suitable for a large range of graphics applications including canvas, wallpaper and banner printing.