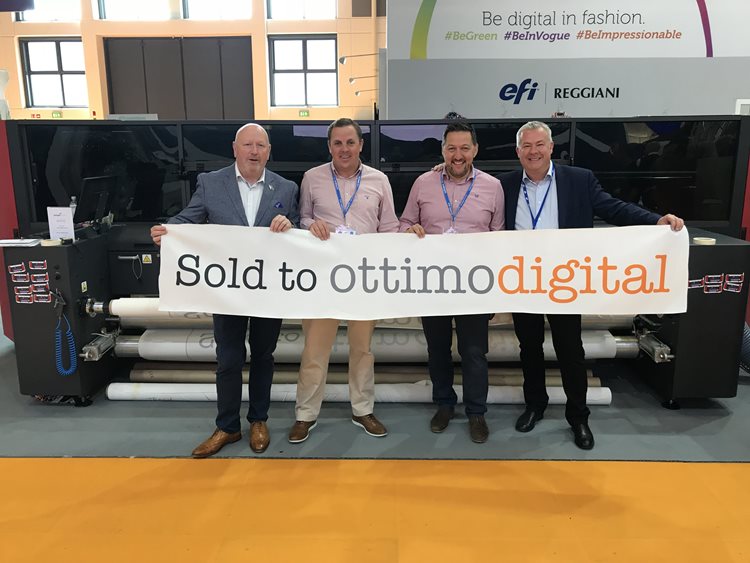 Kate Taylor speaks to Directors Nick Lindwall and Lee Crew who after 10 years are celebrating a yearly turnover of over £2 million and have invested £1 million in EFI kit from CMYUK.

In 2009, Directors Nick Lindwall and Lee Crew noticed a gap in the market to provide
a high standard, large format digital printing service in South Wales. Originally, they started as a print room less than 20sq/m in size and with only one 1600mm-wide solvent printer, they hit the ground running. 10 years on and the company is celebrating a yearly turnover of over £2m.

Having invested close to £1m in EFI kit from CMYUK in the last 2 years alone, Kate Taylor, asks the duo about the secret of their success and what the future holds for Ottimo Digital.

Let’s go back to 2009 – how did your business model prove such a success?

Nick Lindwall: Lee and I saw a gap in the market and decided to start off really small – we were literally working out of a space the size of a bedroom with one roll-fed printer. The business grew from day one. We found ourselves really busy, with a heavy workload, so invested in more similar roll-fed machines, although sticking to a maximum of 1600mm wide.
Lee Crew: We mostly worked for trade businesses, for the exhibition sector. We were printing and hand mounting onto 3mm Foamex. After a few years, however, we had to move into our own dedicated premises, as we needed more space to expand. Then in 2013 we finally made the leap to flatbed printing. Instead of spending £10k on a printer, we were investing £80k, but it was worth the investment as it really revolutionised things for us – both in terms of cost saving and increased output. So, it was a real turning point for the business?

Nick Lindwall: Absolutely. And we continued to grow. Our next major step was to get into wider roll-fed printing so we bought a 2.6m-wide, then a 3.2m-wide, latex. That then got us more of the super-wide jobs, particularly for exhibitions, banners and wall wraps.
Lee Crew: In 2017, we decided to go even wider so got in touch with Robin East at CMYUK. We’d bought various items from them before and knew they were the ones to advise on the right printer. We went out to Belgium for a demo, then ordered the EFI Quantum 5 LXr. A year later, we purchased an EFI VUTEk LX3 and we have just placed an order for a third EFI machine – a VUTEk FabriVu 340i, due to be installed this month.

Ottimo Digital have invested nearly £1m in EFI kit. What is it about their machines that you like so much?

Nick Lindwall: They do exactly what we need them to do, and more. Thanks to the EFI printers we have doubled our output, and can offer turnaround over twice as quickly as previously possible. We couldn’t have grown the business without them, as demand is constantly growing and high speed and quality are expected.
Lee Crew: The textile and soft signage markets are growing at a rapid pace. We can now offer everything, from UV to Dye Sublimation; this latest VUTEk completes our shop if you like. We have everything we could possibly need as a wide-format digital printing company.

What are your hopes for the future?

Nick Lindwall: Until recently we had been losing out on the larger print projects, as we simply didn’t have the capacity. Our recent investments – like the 5m-wide Quantum and the high-speed VUTEk LX3 – allow us to take on a much wider range of projects.  Honestly, every time we have a new machine installed, within a month we are wondering how we ever managed without it. I am confident that we will be saying the same about our FabriVu investment in a year's time.
Lee Crew: We’re now one of the only companies in Wales and the Southwest with a print bureau with such a fast turnaround and such a large capacity. Moving forward, we’re really excited to be launching into Soft Signage with Dye Sublimation

Do you have a good working relationship with CMYUK?

Nick Lindwall: Absolutely. They have always gone above and beyond to offer the help and support that was needed. From the day the Quantum went in, we have had training on tap. They have even sent people over to give extra support when we needed it and we’ve received great training at their Demo Centre in Shrewsbury.
Lee Crew: It’s more than a working relationship. It’s become a personal relationship – if we are struggling or stuck, we can literally pick up the phone and get help. With most manufacturers, the channels are less personal, but CMYUK is the full package.

FESPA Global Print Expo 2019 is Europe’s largest speciality print exhibition for screen and digital wide format print, textile printing and signage solutions. Visit EFI in hall B5 stand E10 at the Messe Munich between the 14-17 May 2019 and discover the available features. Please use promo code FESG902 to register for free.