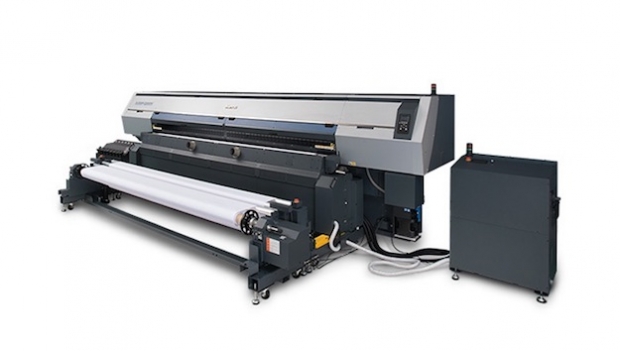 Mimaki has expanded its wide range of solutions by presenting the Tx500P-3200DS, a new 3.2m direct sublimation printer.

Japanese manufacturer Mimaki has announced the launch of the Tx500P-3200DS, a 3.2m direct sublimation printer mainly designed for use in the soft signage industries.

"There is a growing demand for soft signage due to its economic and environmental benefits,” said Mike Horsten, General Manager Marketing of Mimaki EMEA. "At the same time, the textile industry is shifting increased volumes from analog to digital printing in order to meet market demand for the growing number of small lot orders and shortened cycle times."

"The new Tx500P-3200DS was designed specifically to meet these requirements in both segments, as well as the growing demand for digitally printed textiles in home décor, with its requirement for extra-wide fabrics to draperies, linens and upholstery."

The new printer is a development on the Ts500P-3200, which was launched in February of this year, but with a number of new developments.

The Tx500 comes with an in-line heat fixation unit, which can generate temperatures of up to 200 degrees celsius; and reduces production time through its simultaneous performance of two operations, printing and colour fixation, reducing two steps to one.

“It reduces your production time when in-line calendaring. Once it’s rolled up, you’re finished and you don’t have to bring material to the calendar station. So it is timesaving when printing and finishing, but the restriction is that the choice of materials is a little bit less,” added Horsten.

At a print speed of up to 130 sqm/h, the Tx500P-3200DS is ideal for production of samples as well as large lot production with short delivery times. It also uses 12 print heads in a staggered three-line array.

“What is truly unique about this printer,” Horsten added, “is the combination of printing and heat fixation in a single pass. Direct sublimation transfer printing requires the fixing of printed inks through heating. In a typical operation, these processes are performed separately, adding time and touches to textile printing."

"When operations are dealing with very small lots, samples or longer runs with tight delivery schedules, every minute counts. Our goal in bringing this unique configuration to market was to deliver a printer that was more efficient than anything else on the market, and this new printer meets that need.”

As with all Mimaki printers, this new printer features precise placement of well-shaped ink droplets onto the fabric for the best possible quality. This is accomplished by automatically taking into account the specific gravity and viscosity of each ink, precisely placing droplets as small as 6 picoliters for beautiful, high resolution printing results.

Mimaki has just announced two recent product launches, the JFX200-2531, launched two weeks ago, and two new flatbeds, the UJF-3042 MkII and the UJF-6042 MkII, launched a week before that.

The new machine is expected to become available for purchase in early 2017.