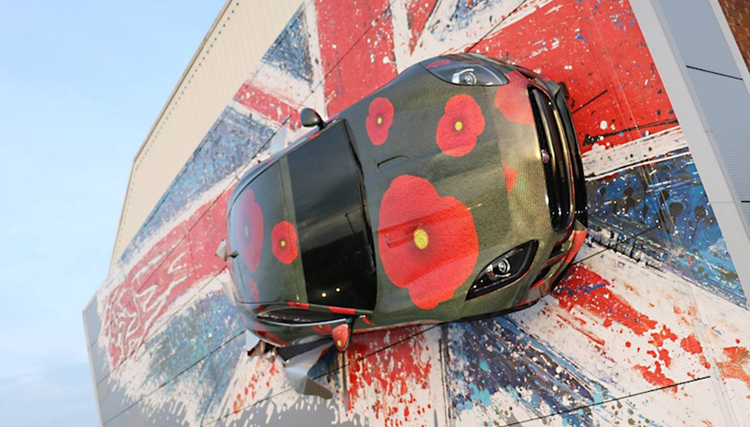 The F-TYPE, clearly visible to motorists on the M6 motorway, fittingly faces the Sentinel sculpture which depicts the Spitfires Castle Bromwich was famous for building during World War Twobetween 1938 and 1945.

The tribute is the latest in a string of commitments from the company as it aims to become the automotive employer of choice for former armed services personnel.

Jaguar Land Rover has hired over 750 former servicemen and servicewomen since 2013 and is a Gold Award holder of the Armed Forces Covenant Employer Recognition Scheme, a written and publicised voluntary pledge from businesses and charitable organisations who wish to demonstrate their concrete support for the Armed Forces community.

It has welcomed a total of 29 ex-armed forces personnel on to its Wounded Injured Sick (WIS) programme since 2014, 18 of which have found employment with the UK’s largest automotive manufacturer whilst many others have secured roles within the wider supply base.

The business is also the headline partner of the annual Invictus Games, an international sporting event to inspire recovery, support rehabilitation and generate a wider understanding and respect for wounded, injured and sick Servicemen, servicewomen and veterans.

Mission Motorsport, the Ministry Of Defence’s charitable authority on motorsport for recovery, created a unique poppy-themed livery for the F-TYPE which sits affixed to the outer wall of Jaguar Land Rover’s Castle Bromwich site where the sportscar is built.

The design, emblazoned with the words of John McCrae’s poem In Flanders Fields written in 1915 in the midst of World War One, was fitted in situ by the charity’s team of ex-servicemen who were discharged from active service with physical and mental injuries.

A second F-TYPE SVR was adorned with the poppy design at Mission Motorsport’s workshop in Wantage, Oxfordshire. It will go on a ten-day UK tour in the leadup to Remembrance Sunday, starting at the Royal British Legion’s Birmingham Poppy Day in Victoria Square on Wednesday 1 November.

From there it makes its way around Jaguar Land Rover sites and military landmarks such as the National Memorial Arboretum in Staffordshire before arriving in Anglesey to play the role of safety car for Mission Motorsport’s fourth annual 12-hour endurance event Race of Remembrance.