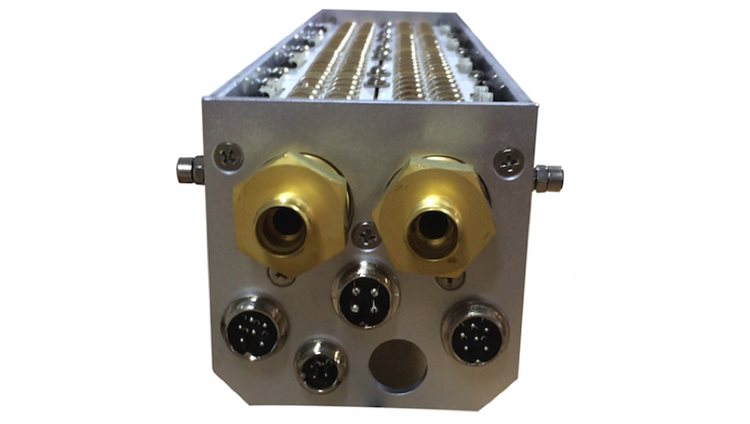 The kit, which was launched in the US earlier this year, represents one of the most powerful LED UV curing system on the market. It enables most traditional UV and water-based flexo presses to be converted to LED UV curing, boosting productivity and environmental performance while reducing costs and waste.

The LED UV curing lamp system is designed to operate with Fujifilm’s new 300 Series flexo inks, which are compatible with all plates designed to work with UV-based inks.

Combined, the manufacturer said the Illumina and 300 Series inks bring the benefits of LED UV curing to traditional flexo presses through a simple conversion process which takes two days or less to complete.

According to Fujifilm, the Illumina’s compact design means the unit will fit easily onto most UV flexo presses of any width, and will also mount directly onto any water-based flexo press without the need to add an extra roller, as is required by some other LED retrofit systems.

“All of the presses that we’ve encountered so far in the US have been fully compatible for conversion. The requirements of a press from an installation perspective are very basic but, depending on the brand, there could be a situation where some presses older than 15 years old are not compatible,” said Fujifilm Graphic Systems Europe packaging segment manager Peter Verryt.

“Importantly, when we’ve talked to customers about it they don’t plan to put it on the oldest equipment in their print shop. So as we can go back 15 years I don’t believe we will have an issue.”

The Illumina is said to produce less heat than other LED technologies, with the kit’s design enabling a potential energy saving of up to 90% compared with conventional UV curing lamps.

The manufacturer said the device also reduces noise and the amount of stray UV light, while also significantly reducing the footprint of power and chiller units in comparison to conventional UV systems.

“The improved working environment is one of the big advantages. An LED lamp brings much lower heat production to the shop floor and, as a result, the chiller of the press, which is an element that creates noise and a different working atmosphere on the shop floor, is basically obsolete,” said Verryt.

“The other big advantages are the cost savings and the possibility to use more heat-sensitive substrates. And from our US customers we’ve also seen confirmation that web breaks are going down to the absolute minimum.”

Debbie McKeegan, or ‘Debbie Mc’ as she’s more often known, is FESPA’s Textile Ambassador and curator of the Printeriors showcase which has become such a popular visitor feature at FESPA events. We caught up with her ten days out from the opening of FESPA Global Print Expo 2022 in Berlin to find out more about what Printeriors ‘22 has in store.