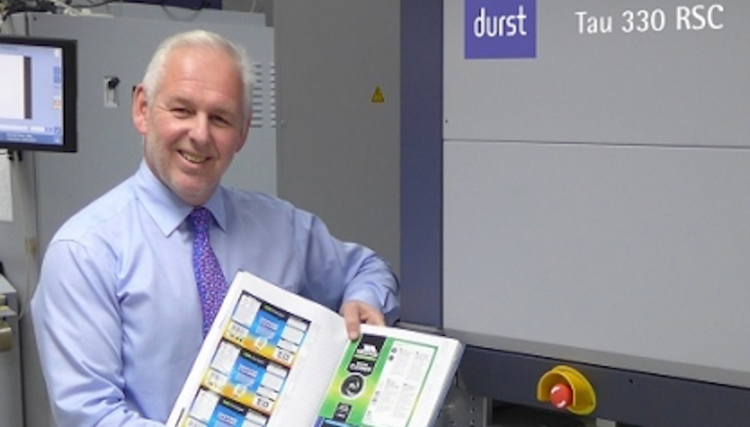 Testing for the device will begin in October at The Label Makers’ premises in Bradford, UK. This new inkjet label press, as well as Durst’s new Web2Print workflow, will be officially launched later this month.

The Label Makers managing director David Webster commented: "Durst has been an incredibly supportive partner with fantastic technology as we continue to develop our business into new and developing markets. As a pioneer, we’re constantly wanting to keep ahead of the curve and becoming the first customer to install the Tau 330 RSC is another huge step forward for us."

The Durst’s Tau 330 press can print at speeds of up to 78m/min (linear) at resolutions of up to 1,200dpi. The device has eight colour stations – CMYK plus white, orange, violet and green – and its maximum production capacity is 1.485sqm/hr.

Helmuth Munter, segment manager for label and package printing at Durst, continued: "We’ve worked in true partnership with David and his team for a long while. We are proud and excited to announce that The Label Makers will be the first company to benefit from this new and game-changing technology."

"The system, which boasts unmatched printing speed and printing quality, is already creating huge interest prior to its official launch at Labelexpo. It’s a perfect solution for label converters that are looking for an industrial scale digital press solution."

Tau 330 RSC is available as stand-alone version or can be combined with in-line digital laser die cutting LFS 330.

Webster concluded: "The increases in speed and quality makes the Durst Tau 330 RSC as competitive as most flexo presses. While it’s not the be-all and end-all of print, I definitely see the future of label production as inkjet. We’re confident that this new press will once again open up many more doors as we continue to expand."

The Tau 330 RSC forms part of a major investment drive at The Label Makers worth around £2m. In the next two months it will also take delivery of a new MPS flexo press while it is upgrading one of its three ABG Digicon label converters to run at speeds of up to 150m/min