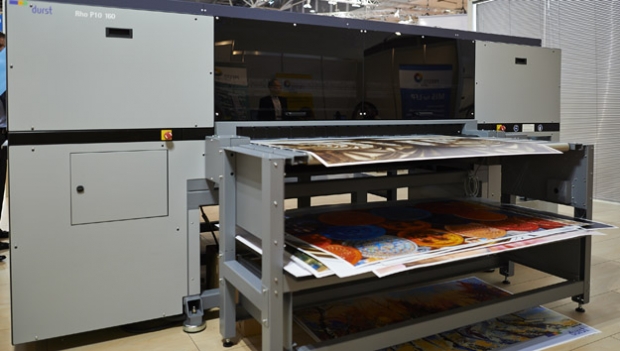 Many printers now use greyscale printing, but what does this mean, and what are the advantages and disadvantages.&nbsp; Nessan Cleary investigates.

In the early days of inkjet printing all the printheads were binary, meaning that they produced a fixed size ink droplet. The size of the droplet determined what sort of use best suited each printhead: small drops produce good definition and high resolution and are good for text; large droplets can cover large areas quickly and are good for printing large flat areas.

But now we're seeing increased use of greyscale printheads, which can produce multiple drop sizes and should deliver the best of both.

There are several different approaches. Some printheads eject different volumes of ink to make different sized droplets, while others eject the same amount of ink, but vary the frequency at which they fire the ink so that the different drops merge in flight, or land at the same spot on the media to form larger drops.

All the vendors agree that the biggest issue that affects print quality is the accuracy in placing these dots of ink on the media, which becomes more complex if you are trying to have multiple droplets land in the same spot.

There are a number of challenges, including the movement of the print carriage, which creates turbulence that risks disturbing the droplet's flight through air. It would obviously be better if the head was closer to the media, to reduce the flight distance, but this would increase the danger of the media striking the printheads, one of the major causes of printhead failure.

Also, the media may not be perfectly flat, particularly with flexible media on large flatbeds, which makes it hard to predict precisely where the ink will land. Thus flatbed vendors put a lot of effort into keeping the flatness of the bed to within a few microns.

Océ, now part of Canon, has used greyscale printheads from Toshiba Tec for all of its Arizona printheads, starting from the very first model, the 250GT. Fred Robinson (pictured below), project manager for R&D for Canon’s Océ Arizona printers, explains: “When we first looked at printheads there were several vendors." 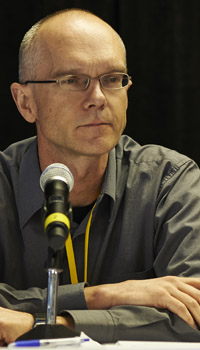 "We did an extensive study which took about two years and we focussed on the quality and the reliability of the printing technology and based on all these factors we decided to go with the multiple drops. At the time it was one of the first multiple drop printheads on the market. We feel it’s still the best technology.”

Thus the Arizona printers produce seven different drop sizes from six to 42 picolitres. For reference, six picolitres is about a third the size of a human hair. When the bigger drops are fired they stretch out into several smaller drops and then combine in flight to make one large droplet. Robinson says: “The idea to put bigger drops to build up the size is key to productivity and quality.”

Kevin MacArthur, systems engineer for Canon Océ, adds: “The smaller drop size allows us to get the sharpness that we require. It allows us to make the switch from sharp detail to areas of open smoothness and we use the other drop sizes to fill in the space.”

HP has developed a system that it calls HDR (for High Dynamic Range) for use with its Scitex FB 10000 flatbed printer. It’s a drop on demand printhead that uses a piezo actuator - an electrical pulse deforms the piezo actuator, which squeezes an ink droplet out of a given nozzle. The HDR300 printhead ejects a fixed 15 picolitre drop - it can create multiple drop sizes by rapidly ejecting several drops in quick succession. The drops then merge in flight to form a single larger drop.

In this way HP can create 30 and 45 picolitre drops as well as the original 15 picolitre drop. This, incidentally, is referred to as four levels of greyscale - we count zero ink as the first level. Each one of the HDR300 heads has 192 nozzles, spaced at 150 nozzles per inch for a 32.5mm print swathe. The head uses 12 ml of ink per minute and can fire up to 24,000 drops per second.

Durst has developed its own take on greyscaling, which it calls VarioDrop (pictured top). This is a multipulsing solution that combines two voltage pulses so that the second pulse increases the size of the drop just at the point where it detaches from the nozzle plate so that it falls as a single clean drop without splitting into smaller drops. Thus the Rho P10 series printers can produce a native 10 picolitre drop, but the multipulsing can enlarge this to a 15 picolitre drop. This gives some of the benefits of greyscale, but avoids some of the problems associated with greyscale. 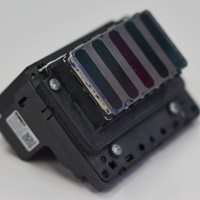 There are a number of advantages to using greyscale printing. Firstly, mixing bigger and smaller dots makes it easier to deal with gradients and slight tonal shifts, such as in a skyline. It can also lead to reduced ink consumption, partly because some of the dots are quite small, but also because it’s easier to get smoother gradients with four colours without needing additional colours.

But the complexity of combining multiple drops to make a single dot can slow down the printer and lead to more expensive printheads. Some vendors believe that a fixed drop size of 10-14 picolitres is the optimum size, which can give good resolution when combined with multiple passes at high print speeds.

For now, it’s down to a balance of cost and performance, with smaller machines generally favouring greyscale for image quality while some, but not all, of the bigger machines opt for the speed and simplicity of a fixed drop size. However, we are seeing a greater use of greyscaling as printheads, such as the Epson Precision Core printhead (pictured right) become more robust.

Also, it’s worth noting that if wide format printers are eventually to move to single pass arrays, as is happening with document and label printers, then greyscale will become an essential requirement.