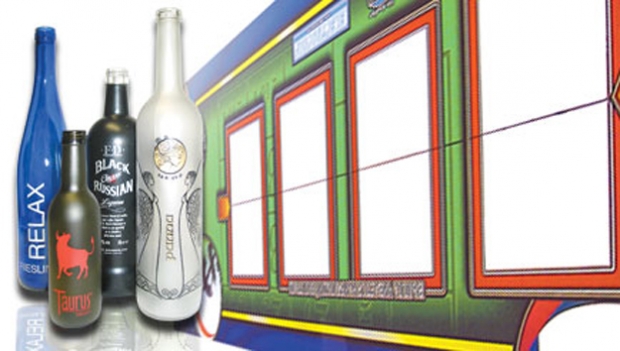 Screen printing caters for a very wide range of applications, from graphics to textiles and industrial uses, and this is reflected in the choice of inks available.

This includes solvent and water-based inks as well as UV-curing inks. Some of these are better suited than others to particular substrates and applications.

One of the great advantages of screen printing is that you can adjust the ink to suit your requirements. As a general rule, most solvent inks are not ready to use and require thinners or retarders to be added. UV inks are generally ready to use from the tin but you might still mix in further additives for special requirements, such as an anti-slip surface or a resistance to sticky tape or a hardener for a tougher finish or even just to work with finer mesh.

When it comes to display and graphics applications, most printers appear to be predominantly using UV curable inks. However, UV curing requires a bigger investment in drying systems so many smaller companies may stick with their existing solvent screen print set-up, and some of these may also have moved more into industrial markets. But UV curing is more attractive to the larger players because it offers a smaller footprint, faster throughput and easier control of the process.

That said, solvent-based inks still have an edge in dealing with difficult substrates and can also offer greater opacity. Solvent-based inks are still widely used in the industrial markets, mainly because there may be particular performance requirements.

Robin McMillan, marketing manager for Sun Chemical, explains: “In graphics the ink is usually chosen just for its graphic qualities. But in the industrial space there may be more functional reasons such as resistance to whatever's in a plastic container, like bleach.”

But for general graphics work, the UV inks seem to win out.

James Whitehead, wide format marketing manager for Fujifilm Speciality Ink Systems, points out that solvent inks used on a flatbed screen with a wide area will lead to a significant amount of the ink volume evaporating off as the ink dries. He adds: “The other issue with an evaporative process is that there will be a tendency for the ink to try and dry whilst it's still in the screen.”

So, not surprisingly, Fujifilm only offers UV inks. Whitehead says: “UV helps you to print with finer mesh screens and finer detail and it’s more cost effective.” Whitehead says that screen print inks can give very vibrant colours, noting: “I think that for pure Pantone colours then a colour matched ink is still going to give you a better result then a digital system will.”

Dave Duffy, technical services representative for Nazdar in Europe, says that Nazdar has seen some interest in its water-based inks, mainly because they are seen as being more environmentally-friendly. Water-based inks can be more difficult to work with as the ink is prone to evaporating off. Nazdar sells the 2700 Series for use with paper board, vinyl type applications.

Duffy notes that it’s relatively easy to switch from solvent to water-based inks because they use the same dryers. Switching to UV inks on the other hand requires an investment in UV dryers and a different mindset in handling the inks.

Duffy also says that one of the major trends now is for LED UV curing. There are a number of advantages to LED curing. Firstly, there’s very little heat so no need for cooling, which can be useful for some substrates such as polycarbonates. Also the lamps last considerably longer – 10-30,000 hours as opposed to 1,000 to 1500 hours with a mercury vapour lamp. But the inks are more expensive and the technology is only in its infancy.

However, McMillan says that although there is a lot of talk about LED UV curing, there are not many installations in the graphics sector. He says: “They tend to be fairly wide and could be over two metres so the economics don't stack up as well as for industrial uses that might use a narrower format.”

As we’ve noted, there’s a wide range of substrates that can be printed via screen printing, which means that most ink vendors tend to carry a wide range of different inks to cope with types of material.

However, the reclassification of some chemicals under the REACH initiative - and in particular NVC - has led many ink vendors to have to reformulate their inks. Thus Fujifilm, for example, has developed a multi-purpose ink, UVXtra VW, which is available in both a gloss and satin finish. It’s suitable for a range of materials from PVC to Correx boards. Whitehead explains: “Historically we would have had three or four different inks for these materials but now we have just the two, which has advantages in carrying lower stock inventory.”

The wide format graphics market has been under a sustained assault from digital printing and this is one reason why many ink manufacturers do look to the industrial market requirements. But McMillan says that digital printing is having less effect now: “Ten years ago there were significant inroads in screen printing because of digital but I would say that has largely levelled off today.” Instead he says that most of the large service providers have a mix of technology, including screen printing.

He points out that screen print inks have a much longer outdoor life span, with no need to laminate them and also says that screen printing inks can be mixed for additional requirements such as resistance to solvent cleaning products. He adds: “The other advantage of screen is its ability to print spot colours accurately. You can have metallics and fluorescents and also opaque whites are much easier. So you can get much more accurate Pantone matches.”

But he also says that it’s not a case of one technology displacing another as many printers will use screen to add an opaque white backing to a digital backlit print or a large area of a solid tint, because the colours are better or more opaque, or simply cheaper to use.