Top 20 Halloween prints of all time It’s that time of year again when we hollow out pumpkins and carve scary faces into them; stock up on sweets for trick-or-treaters, and perhaps don a witch or ghost costume for the office party.

Halloween is upon us and, as with every major holiday and celebration, brands and marketeers are keen to capitalise on the festivities by adding a seasonal feel to their advertising campaigns.

Whether it is redesigning packaging to feature a spooky theme, or producing a series of scary posters, there are so many great examples of printed work at this time of year.

FESPA picks out some of the best example of Halloween-themed print work – from adverts and packaging, to clothing and billboards – to showcase the creativity of those in our industry.

1. A spooky drink for a scary day

Description: If changing the branding on a product isn’t enough, Pepsi has gone the extra mile be introducing a new drink for Halloween. Dinosaur Dracula says the taste of Pepsi Halloween Cola as similar to strawberry candy, which is hardly inspiring.

However, Dinosaur Dracula says the label, featuring a printed design with ghosts and ghouls, is “cool-as-heck”. Sadly, only available in Japan… 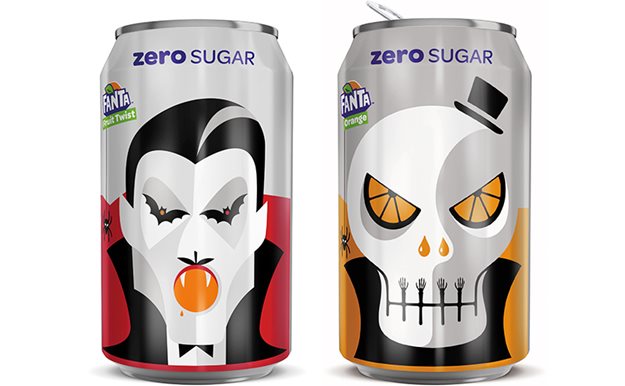 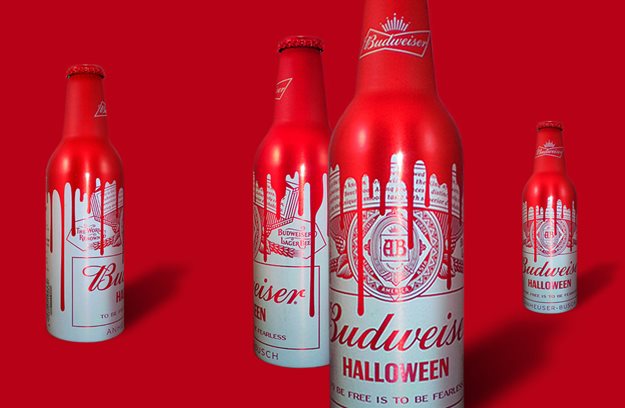 Description: Still on the theme of drinks, we cross over to the range of products available for adult Halloween parties with Budweiser. Anheuser-Busch asked Yamie Shah to create seasonal packaging for its famous beer to celebrate the Halloween festival in China.

4. Knees up with Party City 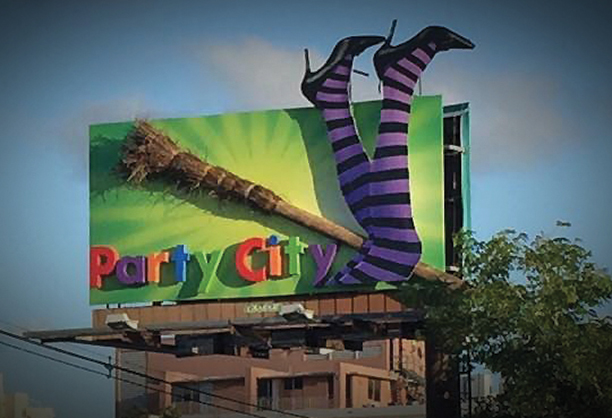 Description: It looks like to wasn’t such a happy Halloween for this witch, who seems to have dropped off her broomstick in this advert for Party City in Puerto Rico. The witch’s legs and the ad background were printed on an EFI VUTEk 5330. 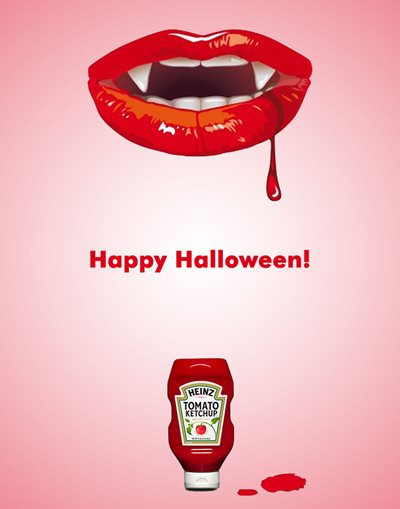 Description: Halloween is the time of year when vampires come out to play, and it seems that they may have developed a taste for Heinz Tomato Ketchup going by this printed advert that appeared in various publications.

6. A scary re-brand from Reese’s 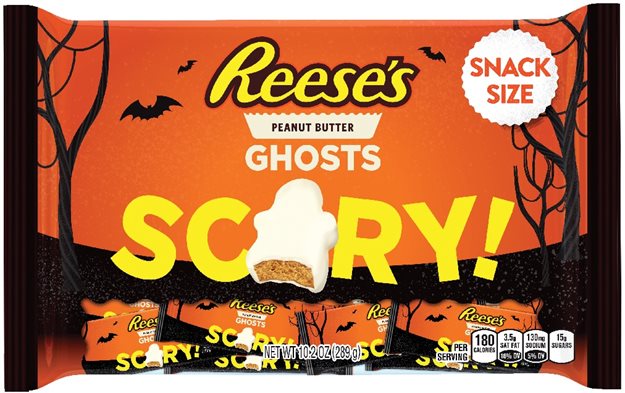 Description: One of the most famous brands from the US confectionary market, Reese’s got in on act by creating a special product and brand for Halloween. The ‘ghost’ pieces are accompanied by packaging that features a spooky Halloween theme, perfect for any visiting trick-or-treaters!

7. Getting our own back on Halloween’s bad guys 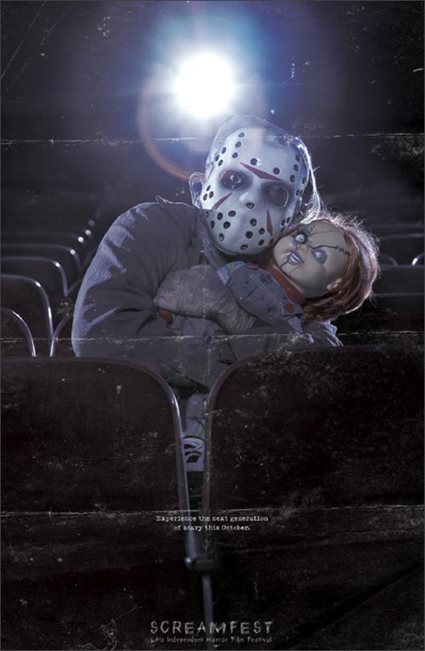 Description: Halloween is a busy time of the year for monsters and baddies, so perhaps it’s time they sit back and enjoy the season of spook.

This printed ad campaign for the LA Independent Horror Film Festival shows some of the most famous horror villains recoiling in terror at the ‘next generation’ of scary films. Here, Jason Voorhees from the Friday the 13th series cradles poor baby Chuckie…

8. Fishing for lemons at Halloween?

Description: A take on the traditional pumpkin lantern, Fisherman’s Friend used Halloween to promote its lemon flavour during advertising campaign that ran in Germany. 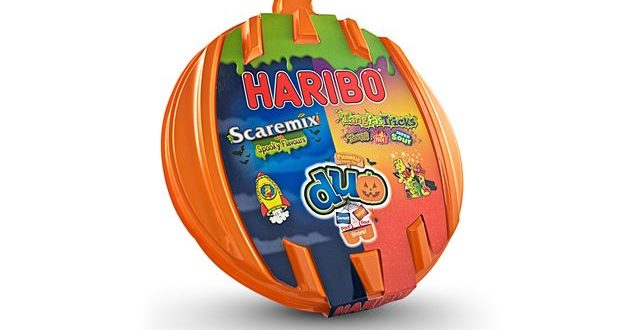 Description: For the second consecutive year, confectionary giant Haribo has teamed up with Kingsmoor Packaging to produce pumpkin-themed packaging for its Halloween sweets. Both the tub and lid on the pumpkin box are fully recyclable, as is the accompanying printed packet. 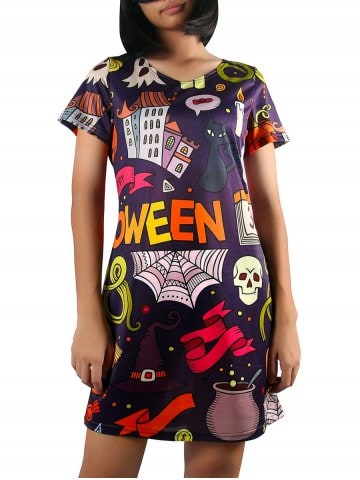 Description: It’s not just brands and marketeers that can have fun with print at this time of year. Rose Gal in the US offers this dress as an alternate option for your Halloween party. 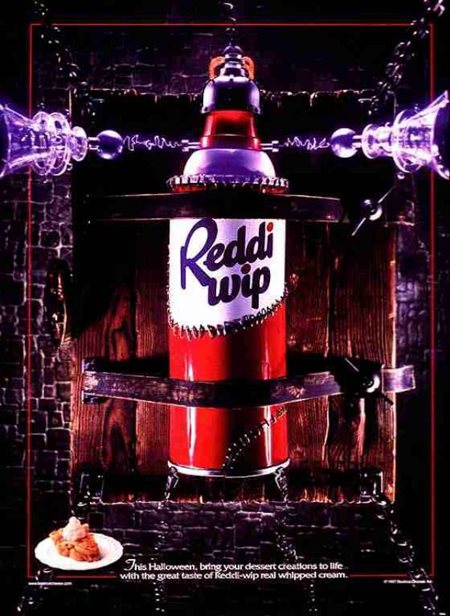 Description: They say classics never die and this example of a magazine advert from the late 1990s is proof. Reddi-wip invited consumers to add more life to their dessert with its whipped cream – much like Dr Frankenstein did when he brought his famous monster to life in the famous Mary Shelley novel. 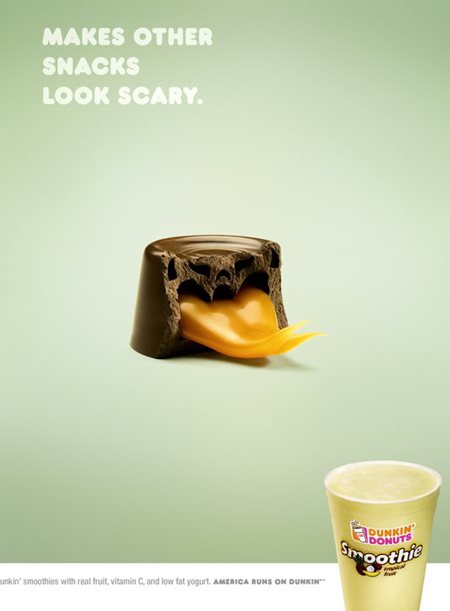 Description: Snacking might be scary for your teeth and waistline, but according to Dunkin’ Donuts in this US-focused campaign, its smoothies are much more innocent than other snacks! 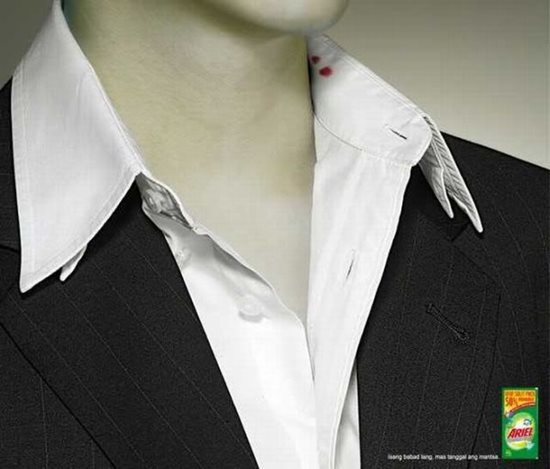 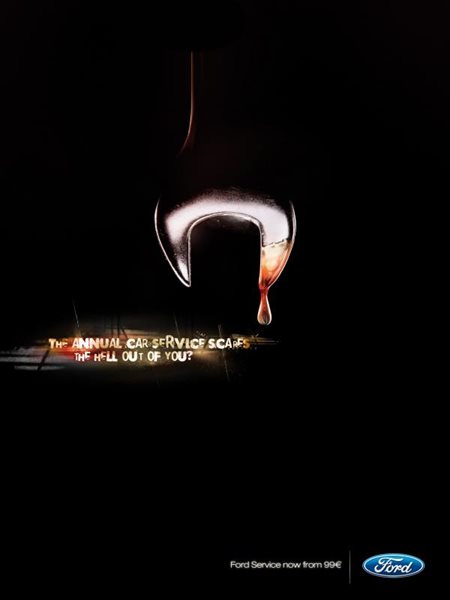 Description: It’s something we all hate doing but have to go through every year. No, not the Christmas shopping list, but the annual car service. Released in the Greek media, this advert plays on the Halloween theme while promoting Ford’s  €99 car service offer. 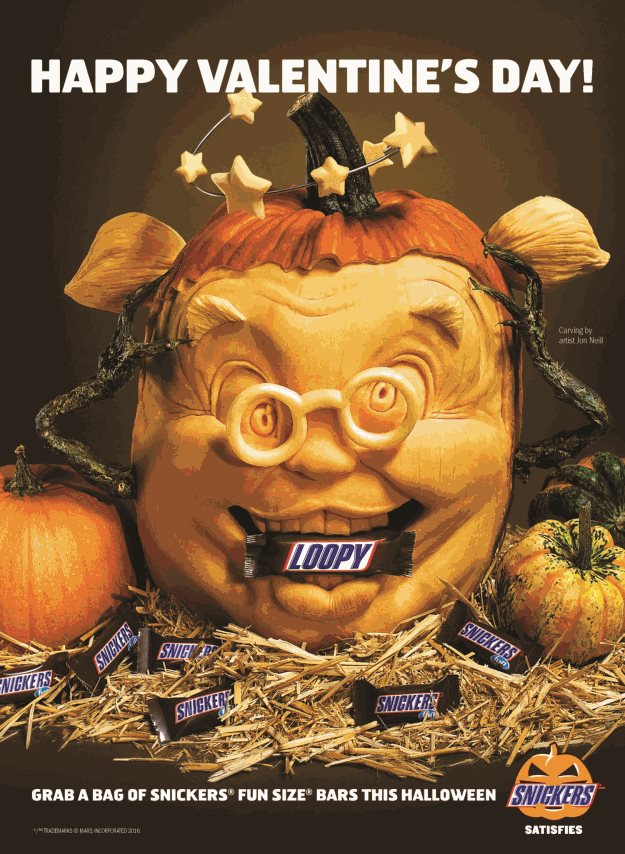 Description: Snickers played on its ‘You’re not you when you’re hungry…’ tagline with this printed ad campaign that ran in a national magazine. The 2016 advert shows a pumpkin wishing readers ‘Happy Valentine’s Day’, suggesting the need for a Snickers to cure this hunger-related confusion… 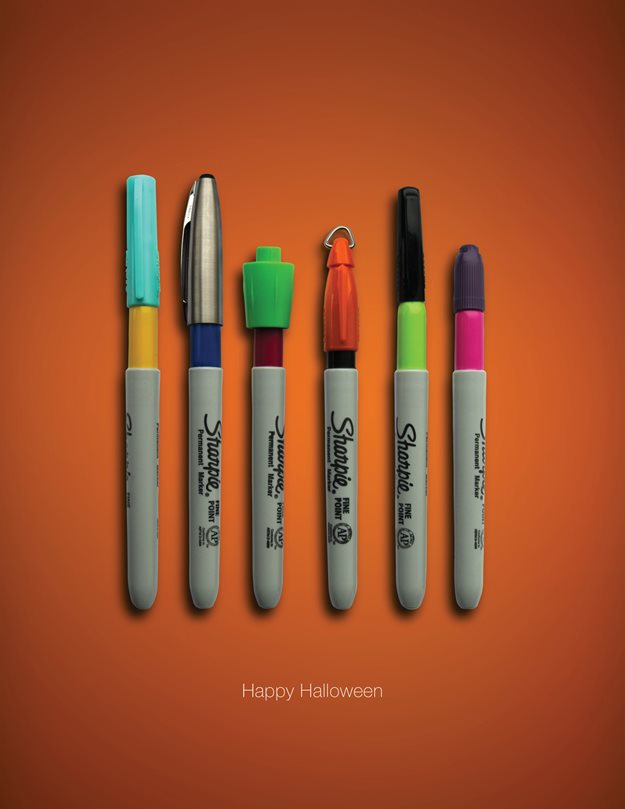 Description: Although perhaps not so scary to the general consumer, this will strike fear in the hearts of designers, illustrators and people with OCD all over the world! Sharpie suggests there is nothing scarier than putting the wrong lids back on a pen. The ad appeared in various printed media in the US. 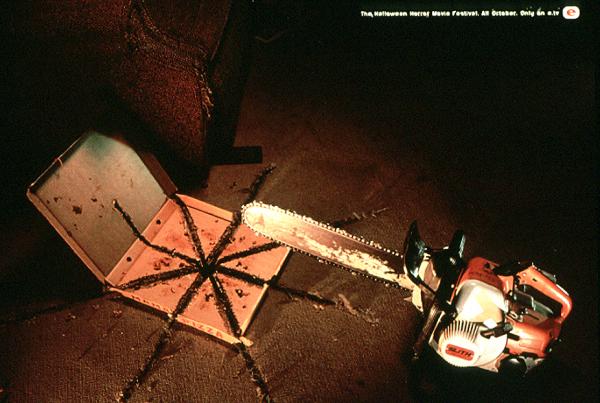 Description: At first glance, you might this is an advert for extreme pizza-cutters. Back in 2001, this ad featured as part of a print campaign for a Halloween Movie Festival on Etv in South Africa.

18. Absolut Psycho in the shower! 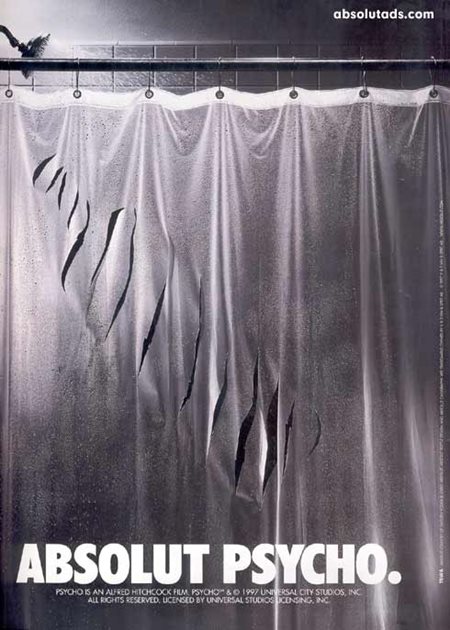 Description: Classic Halloween advert here from Absolut, which plays on the hit move ‘Psycho’ by recreating the famous shower scene and turning the slashes in the shower curtain into the shape of a vodka bottle. 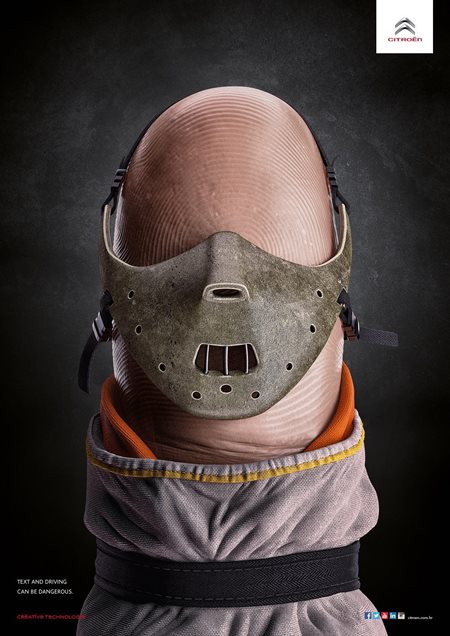 Description: A campaign that ran in various printed publications in Brazil, here, Citroën encourages drivers not to use their phone at the wheel. The campaign featured a number of images, but Hannibal Lecter was our favourite. 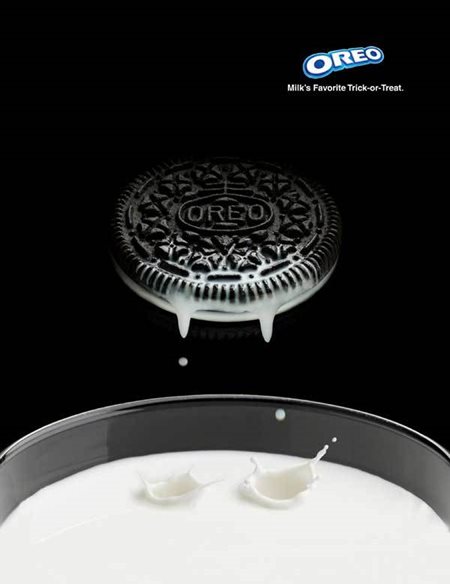 Description: Vampire are known for their love of blood, but could it be that their taste buds have changed over the years for something a bit sweeter? Oreo seems to think so with this printed ad campaign!