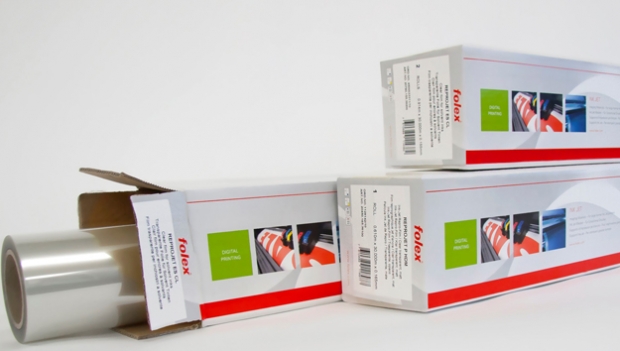 As screen printing modernises, will the flexibility of inkjet help bridge the gap by saving the screen printer money in the pre-press process?

Film isn’t dead yet, but as the major analogue print processes increasingly switch to various methods of filmless plate production, there’s not much incentive for manufacturers to develop or update their filmsetters.

This is particularly important to screen process, for while there are direct imaging systems for screen meshes, they’re too pricey for the majority of smaller users. They have been able to either run their own filmsetter or buy in exposed film from a trade service, but the writing’s increasingly on the wall for both options.

Using a conventional inkjet printer to put the UV-masking image onto clear film looks like a good alternative. It’s not a new idea, but it’s getting ever more relevant as film declines. Depending on the size you want, a high resolution inkjet costs a lot less than a filmsetter, plus it is more compact and doesn't require developer units and chemistry. Ink receptive film costs less than light-sensitive photo film. You can use standard UV-sensitive mesh coatings, printing-down frames and lamps, though you may need to adjust the exposure somewhat.

A good roll fed 17 aqueous inkjet costs less than €2,500 and so is affordable to small screen printing operations that could never justify their own filmsetter, let alone a direct-to-screen system. A desktop sheet fed A3 or A4 printer costs only a few hundred Euros, within range of garage or back bedroom operations. The idea is simple, though the devil’s in the detail so there are some issues to be aware of.

Andy Huxley, technical product manager at image2output in the UK has worked with inkjet film output for several years, both with his current company, which resells Folex’s ReproJet P film and previously at Colourgen, another UK inkjet specialist that sells Sihl’s inkjet films under its own Elite Essentials brand name. “I tested a lot of films when I was at Colourgen for compatibility with Epson printers,” he said. “The new Epson HDR ink for instance doesn’t work with some of the older film coatings, but it’s good with the Folex film,” he said. “We’re also now looking at other films with more competitive prices.”

The most important requirement is that the film is as transparent as possible to UV light when in contact with the screen mesh in the exposure frame, while the ink (black is normally used) needs to be opaque to UV so it acts as a mask. Huxley said that this sometimes confuses users, as the black inks are visibly slightly transparent after printing (as process inks, they need to be). “It’s like sunglasses, where you can see through them but they still block the UV from reaching your eyes,” Huxley explains. Some adjustment to exposure will probably be needed when switching from conventional film to inkjet.

Complementing the films are special versions or modules for inkjet controllers (Rips), which generate appropriate halftone rulings and dot shapes and patters for screen process. ColorGate, Wasatch and StudioRip can supply Rips with screen printing features. ColorGate’s Filmgate8 Rip costs from €999. A Wasatch SoftRip SP, intended for halftone and separation output, costs about €860 for the desktop version and about €1,350 for the small format version for printers up to 24 and 30 inches. A StudioRIP IE (inkjet edition) costs €995 for up to 17 inches and €1,270 for up to 24 inch printers.

All the inkjet films work with completely standard printers and inks. This means that you could use the same Rip and printer for colour proofing and print-for-pay work as well as screen film output.

Piezo-head inkjets seem to be most widely used for screen process films, in particular the Stylus Pro or newer SureColor SC models from Epson. This is mostly due to their high resolution and variable drop sizes.

While it’s possible to use thermal inkjet printers and inks with film (primarily HP and Canon aqueous ink printers), their screen dot creation isn’t as accurate, according to Tim Stockley. He’s managing director of Colourbyte, a UK based specialist in inkjets and consumables for graphic arts use. Colourbyte supplies PosiPrint, a polyester based inkjet screen film made in Japan, and also sells the Wasatch RIPs. The company packages them together as the Colourbyte Inkjet Imagesetter solution, which it promotes to both screen and flexo printers.

Sihl makes a clear polyester film called 3160 Screen Positive, with an aqueous ink friendly coating that’s listed as compatible with Canon imagePrograf, Epson Stylus Pro and HP Designjet T- and Z- printers. This film is sold in roll widths from 17 to 60 inches and is also resold by a number of companies that are required to use their own name rather than the Sihl brand. For instance Colourgen in the UK calls it Elite Essentials HD Screen film.

Epson’s printers, with maximum resolutions of 2,880 dpi, can generate halftones as high as 180lpi (70 l/cm) for fine screen processes and can easily cope with the much lower rulings needed for general purpose work.

“A lot of work being done is spot UV or other solids for screen printing, that don’t need halftones, so you can get away with much lower resolutions,” says Huxley at image2output. “Running an Epson at 2,880 dpi is also very slow indeed if you’re producing larger format meshes. It can come down to 2 or 3m2 per hour.” Canon or HP inkjets would therefore be fine for work comprising mainly solids and spot coatings.

Inkjet droplets aren’t as precise as the laser spots used in filmsetters. There are issues of dot shape, edge structure and consistent density to be aware of. This is why it’s a good idea to check that the RIP software has specific settings for screen process halftones. “Even if you’re only printing solids it’s still a good idea to use a Rip rather than the printer’s basic software driver,” says Huxley. “The drivers always use a paper profile and try to reduce ink density, which you don’t want for film. Not all RIPs can do this, but we sell the ColorGate FilmGate, which is built for it, and we’re also looking at the StudioRIP.”

You need to put enough ink down to get a good optical density, but too much carries the danger of the ink spreading on the film and giving dot gain. StudioRIP’s technical information explains that it’s important to control droplet sizes so they are smaller around the dot edges.

The StudioRIP is notable for being able to use multiple ink channels to build up dots, using the newer Epson printers. For instance on a Stylus Pro 4900 the green and orange ink cartridges can be replaced with black TorrentInk, which are then used by StudioRIP in twin channel mode, leaving CMYK for normal printing and proofing. Four channel mode runs black in four cartridges, which runs at 2,880 x 1,440 dpi while giving similar quality to the much slower 2,880 x 2,880 dpi setting. Two colour mode prints dots on top of each other at 720 dpi to increase speed and density.

UK based trade finishing company Unique Finishing Solutions (www.unique-fsl.com) specialises in screens for ’ UV spot coatings and other embellishments such as glow-in-the-dark, textured and glitter coatings. Its printing company customers used to supply film for these, but after they adopted computer-to-plate, this was no longer possible. Unique Finishing Solutions didn’t want to buy in film services, so it adopted its own inkjet system.

“We need the flexibility that films give us,” said production officer Paul Billing. “Often by the time a job has been printed and laminated the registration is slightly out. With film we can compensate for that when we make the screens to make sure the fit is spot-on.” 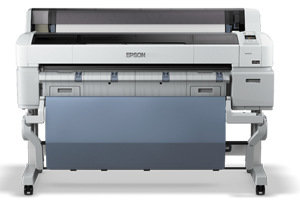 It chose the Colourbyte solution, a package based on the 44 inch Epson SureColor SC-T7000 printer (pictured right) with Wasatch Rip and PosiPrint film.

Often the firm can go several days without having to make a screen and then need to turn out ten at the same time. The company needed a system that is fast and can get up and running quickly. “If we had an imagesetter it would be an additional hassle and expense to ensure the processor was running smoothly, especially with the intermittent nature of our work,” said Billing. “The Colourbyte Solution is the answer and delivers the results we need.”