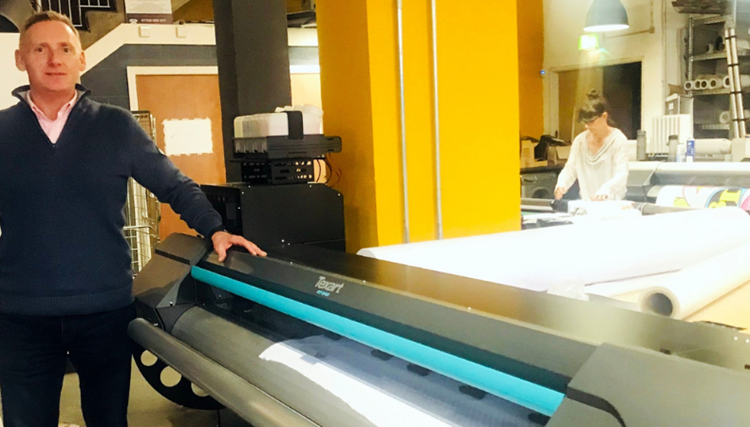 Grangeprint has become the first print business in the UK to invest in and install a Roland Texart RT-640M dye sublimation printer, with company director Paul Evans anticipating significant growth as a direct result.

The Nottingham-based firm took delivery of its new multi-function printer – purchased from QPS – in the middle of October in a bid to offer soft signage solutions to corporate customers and boost its turnover.

Grangeprint already offers a wide range of services such as canvases, posters, wall art and personalised gifts for the consumer market, as well as business signage, banners, exhibition stands, signs and window displays.

Speaking to FESPA.com about the new purchase, Evans said the company opted to return to Roland DG as it already has two Roland RE640’s and a Roland LEF20 UV small flatbed in place, and has nothing but praise for the technology.

“The VersaWorks software I was familiar with, but I had a choice of RIPs, which included the Ergo RIP that I went for and it works fantastic,” Evans said. “I was slightly dubious at first due to it being the first machine produced but I am extremely happy with this machine. The price is fantastic for what it can do.”

Although the machine has only been in place for a matter of weeks, Evans said he has no doubt that it will have a major impact on production. He has predicted that the new Roland device will help to increase turnover by around 5% in the first year, past the current level of £1.3m (€1.5m/$1.7m).

Evans said: “I started this business with no printing experience; my background was running nightclubs as a general manager for 25 years, and I was always designing the banners and leaflets for many clubs around the country.

“So, we started small doing personalised photos on canvas and grew from there, diversifying into solvent printing and then digital press. We also purchased a direct-to-garment printer last month in the form of the new Epson 2100.

“The idea originally was to have a large-format sublimation machine to run alongside our DTG machine so we could print edge to edge on the poly t-shirts. We started looking and thought we might as well look for a dual machine.”

Looking towards further growth, Evans explained that Grangeprint has recently purchased the free hold on a large city centre location in Nottingham next to the National Ice Arena, which will house it huge arsenal of print kit.

Evans added: “We anticipate to capitalise on the volume of footfall both domestic and business.”