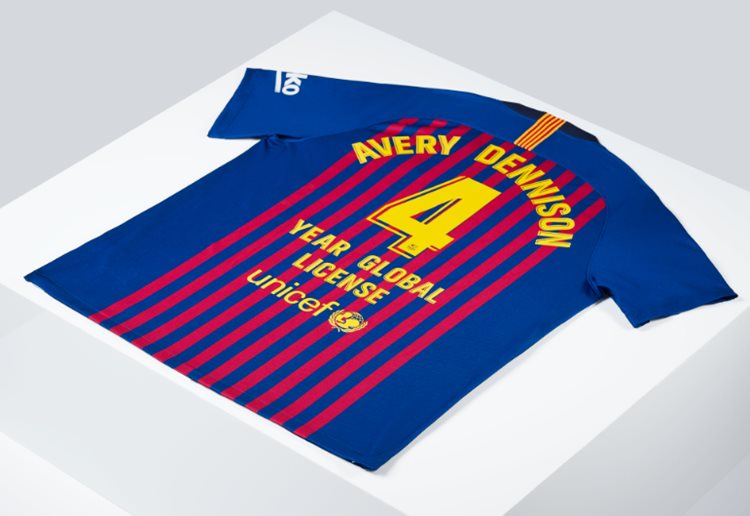 Avery Dennison has revealed details of a new, global partnership with Spanish LaLiga football club F.C. Barcelona that will ensure the company's products are seen by fans all over the world.

The four-year agreement sees Avery Dennison become the global licensee of the team’s name and numbers shirt customisation, with the rights to provide these to all distributors and retailers worldwide.

Shirt printing and customisation is extremely popular in the football world, with fans having the option to have their favourite player’s details on the back of their jersey or even emblazon their own name and number on a shirt.

Barcelona is one of the biggest football teams in the world and recently ranked as the third richest team on the planet, boasting a record turnover of €648.3m (£580.9m) in the 2016-17 season.

The club is known for making marquee signings, which in turn boost shirt sales and customisation around the world. In addition, with players such as Argentine superstar Lionel Messi in the squad, customised Barcelona shirts are among the most sought-after on the planet.

Nikita Jayasuriya, global director, head of team sports at Avery Dennison, told FESPA.com that the company recognises the significance of the deal and speaks of his pride at the new partnership. The firm expects to produce tens of millions of names and numbers over the course of the deal.

“It is a great honour for us at Avery Dennison to work with one the best football clubs in the world, sporting some of the best players,” Jayasuriya said. “We are proud that every time a game is played, our product is visible.”

The deal with Barcelona builds on Avery Dennison’s existing relationships with a number of other top Spanish teams. The company also currently works with 90 per cent of teams in the English Premier League.

Jayasuriya said the firm is now keen to pursue more partnerships with other clubs.

“We already have some exciting deals in place with other football clubs, and announcement of these agreements are in the pipeline, so watch this space,” Jayasuriya said.

The deal with Barcelona also includes an enhanced sustainability commitment, with Avery Dennison stating that its latest products are producing 47 per cent less polyester waste.

Rubén Benseny, licensing and merchandising director at F.C. Barcelona, said in a statement: “We fully trust in Avery Dennison to partner with F.C. Barcelona on our global plan growth and on the development on the new products to connect our final consumer.

“Avery Dennison has demonstrated their capabilities to cover the market and to create new embellishments with new technologies that afford us to up the partnership to a global level.”