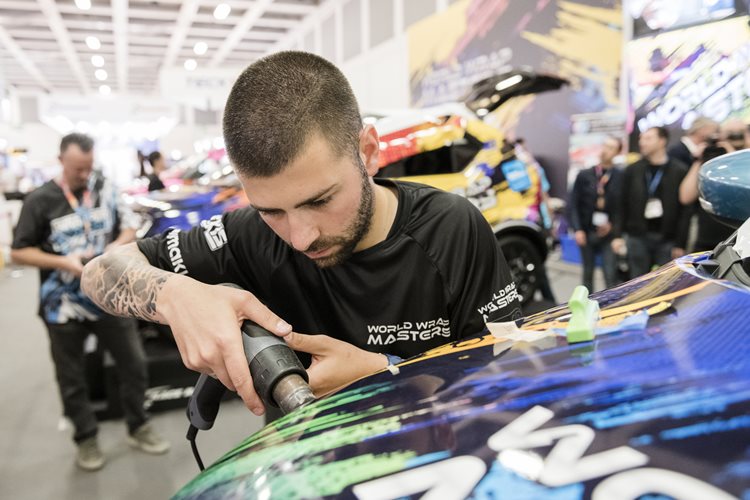 Ivan Tenchev from Bulgaria has been announced the winner of FESPA’s World Wrap Masters Series at FESPA Global Print Expo 2018 in Berlin, Germany. Second and third prizes went to Casper Madsen and Jan Edelgaard, both from Denmark. All three winners received cash prizes.

The FESPA World Wrap Masters Series is sponsored by Hexis and ran throughout the year, concluding with two events at FESPA 2018 between 15 and 18 May.  The competition began on 15th and 16th May with the last regional qualifying competition, the World Wrap Masters Europe. 42 international competitors, including entrants from Japan and Australia, battled it out in a series of timed tasks, including wrapping vehicle sections, chairs and lockers. Stan Cosmin from Romania won the European competition, with Martynas Bertulis from Ireland and Casper Madsen from Denmark coming in second and third place. On Thursday 17th and Friday 18th May, the World Wrap Masters Series Final took place. Here the three finalists from the European competition were joined by winners from previous World Wrap Masters Series events including: Wrap Masters Asia, Mexico and Eurasia, Speedwrap at FESPA Africa, Cambea at FESPA Brasil and national wrap events in Denmark and Finland. Finalists were challenged to wrap Suzuki Ignis cars and challenging objects such as curved chairs and square locker cubes. Ivan comments: “After a lot of hard work and a busy week at FESPA 2018, I am extremely pleased with the happy ending and never thought that with all of the talent in this year’s competition, I would win. The FESPA World Wrap Masters is a great platform where you continue to learn and share experiences with each of the other installers.”

World Wrap Masters judge Jeremy Conner comments: “Congratulations to Ivan! Every round of the competition eliminated highly skilled wrappers who should all be proud of their achievements and progress, and the very last round was closer than I have ever seen, with only a few points’ difference between the winner and the other two finalists. As an installer with 26 years’ experience, it was my honour to see these wrappers perform under the pressure of the tight time limits we gave for each task and in full view of an audience. The spirit of the FESPA World Wrap Masters is the camaraderie among us all and the opportunity to learn new tricks, improve our performance and advance the industry as a whole.”