The Future of Screen Printing 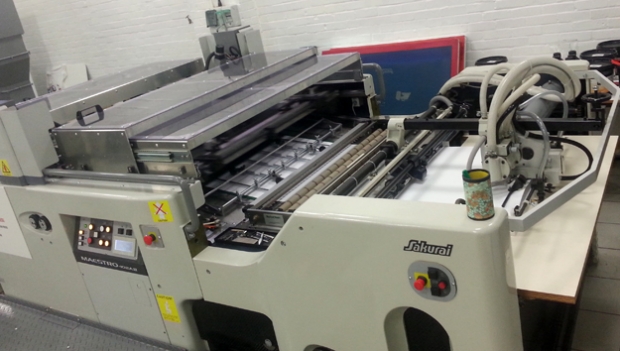 Screen printing is moving into another phase of growth similar to its take up in small and large format graphics, printing textiles and optical discs in 20th century.

Everybody knows about silk screen printing. It is old fashioned, dirty, smelly, unreliable, a craft, and it takes twenty years to become an ink covered expert. It's really only used for printing tee shirts and simple posters.

This statement is as silly as those who say digital printing will take over from every other printing process. There are plenty of articles explaining the wonders of digital printing and there is no doubt it is a wonderful process, admittedly it has plateaued in its development but it still has plenty of opportunities in the market place and will surge again as the technology evolves.

The 21st century has produced another step change. The current surge in its adoption is in applications where it is used to deposit controlled films of material over precisely defined areas. Screen printing is an engineering process that is controllable, measurable and consistent.

Over the years that it has been used substantially as a graphics production process techniques have been develop that make it ideal for processes that are crucial to the development and production in advanced manufacturing. It is now considered as a mass imaging technology. Before looking at its diverse applications it is best to remind ourselves of the fundamental elements of this 4000 year old process.

The core of the process is the printing mechanism, with the most commonly used meshed stencil this is as follows.

The basic items required to carry out the screen process printing are:

Stencil (Image below, courtesy of KIWO): This is a structure that consists of a frame onto which a mesh is attached under tension. The mesh is coated or covered with a photosensitive material. The image to be printed is created photographically on the stencil leaving open areas of mesh through which ink passes. The stencil is also known as "the screen".

Squeegee: a flexible polyurethane blade, held in a rigid mount or handle. This causes the ink to flow into the mesh and removes excess ink from the top of the stencil.

Printing Medium/Ink: Can take the form of a wide range of solids or dyes suspended in a fluid. A large range of ink chemistries are available to suit a vast range of applications. 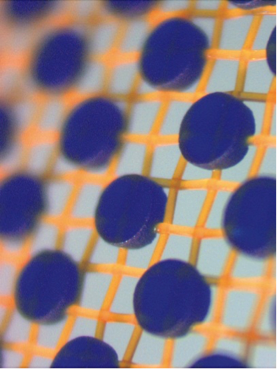 Substrate: This is a general term for the surface that is to be printed. The surfaces can range from bread to bio-medical sensors.

Machine: The machine base provides a surface for the substrate to be printed and the upper section secures the screen. Ideally, movement should be possible between substrate and screen.

The graphic shows screen-printing in its most basic form. From this highly sophisticated equipment has been developed and is used in a host of different applications.

As the squeegee moves away, the tension in the mesh pulls the stencil away from the ink film. The temporary bond draws ink out of the mesh openings and leaves a film of ink on the substrate. There is always a small percentage of ink left in the mesh. The squeegee removes any ink that may be left on top of the stencil.

If the substrate is dirty or the surface energy is lower than or close to the surface tension of the ink the amount of ink left in the mesh will increase resulting in poor quality print. In some cases no ink will be drawn out of the mesh. If the mesh tension is low and takes time to pull the mesh away from the ink then some of the ink will be retained in the mesh openings resulting in an uneven film of ink.

This is an alternative form of printing press as compared to the graphic of the flatbed press shown above. There is a considerable difference in its mechanical operation but the transfer of ink from the mesh to the substrate remains substantially the same.

The difference in the mechanism is that the both the stencil and the substrate are in motion and the movement of ink from the mesh to the substrate is not simply dependant on the tension in the mesh lifting itself out of the ink film. The substrate moves away from the mesh as the cylinder rotates. The configuration of the press, the movement of its component parts and the substrate means that the speed of the ink leaving the mesh can be increased, resulting in print speeds up to 4500 sheets per hour. This compares to less than 1000 sheets per hour on a flatbed press.

At these higher speeds it is necessary to dry the ink to achieve the output. The configuration of the machine allows for greater precision in register and image characteristics. A larger investment than a traditional flatbed press the cylinder press is a fully automatic high speed precision printing machine. 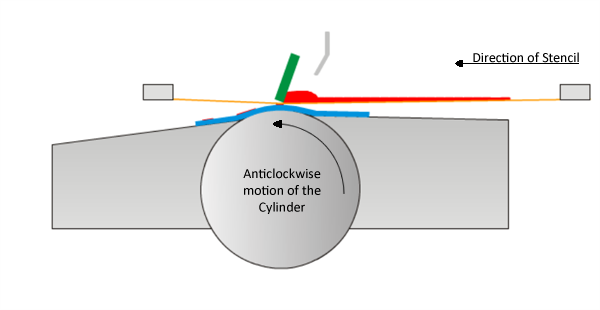 Similar in name to the cylinder press this system uses a stencil formed into a cylinder that can be several metres long with a diameter of up to 300 mm. It will print at very high speed images that will fit around the circumference of the cylinder. The substrate is normally a continuous web that is fed underneath the cylinder. 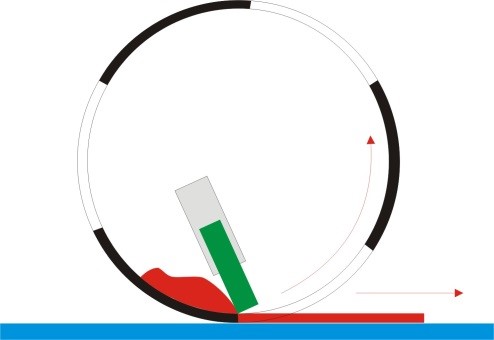 Whenever you think about screen printing no matter what equipment you are using think about what is happening at the point where the stencil is in contact with the substrate.

Normally mesh is used as the support element of the stencil and ink flows in and out of the mesh openings to create the film of ink. There are applications where mesh is not required and the need is to put down blocks of printing medium that is generally a paste rather than a liquid. This is often the case in the electronics industry particularly with Surface Mount Technology (SMT).

The principle of operation with stencil masks is different to that of a conventional stencil. The stencil mask is normally made from stainless steel and is as thick as the intended finished wet film thickness. The mechanism for depositing the ink film is similar in that there can be a squeegee and a flood coater but their function is different as is the sequence of operation.

When the squeegee finishes its stroke the stencil and rest of the mechanism lifts vertically leaving the paste lying on the substrate. There has to be an adhesive force between the paste and the substrate for this to occur. The aim is to provide an even coat of paste over closely defined areas. Sometimes a flood coater is not used, just a squeegee that provides both functions. Low viscosity materials such as conventional inks are not suitable as the printed structure would be unstable and would collapse.

The graphics of the processes in this article show them in much simplified form. The need to have dimensional control of all aspects of the process to within a few microns takes them into the area of high precision engineering.

Just some of the technologies that would not have been possible without screen printing are:

One of the more innovative applications has recently been produced in the Department of Electronics and Computer Science at the University of Southampton. It is the world's first screen-printed digital watch on fabric. Using screen printed paste inks the necessary, conductive, resistive and electroluminescent inks were applied to the fabric.

This along with other application of "Smart Fabrics" will play an increasing part of everyday life.