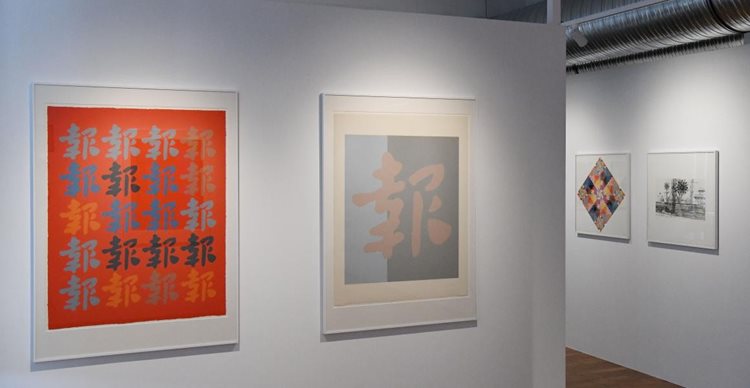 The new and exciting museum will be a striking factory building in Plattenhardt, where key insights focused on the history and present artistic screen printing can be experienced. The museum showcases the well-known "Domberger Collection".

In 2009, the state of Baden-Württemberg acquired the "cultural treasure" of the Filderstadt-based screen-printing company Domberger which has been made available on a loan basis. The museum focuses on preserving, publishing and exhibiting the collection.

"Luitpold Domberger and his son Michael have significantly advanced the development of artistic screen printing and its technical possibilities." Ina Penßler, Head of the Filderstadt office describes the importance of the collection. Willi Baumeister, Anni and Josef Albers, Chryssa, Christo and Jeanne-Claude, Richard Estes, Robert Indiana, Richard Hamilton, Victor Vasarely and Keith Haring are a few well-known names who have collaborated with the Fildern. Michael Domberger is a past president of FESPA.

"Honoring the lifetime achievement of the Dombergers"

Mayor Christoph Traub is also looking forward to the opening of this unique cultural institution. "With this Screen Printing Museum, we can make this special collection accessible to the general public whilst appreciating the life's work of the Dombergers." He would like to thank all those who initiated, organised and supported this project, as well as the administrative staff of the municipal council. Traub describes the museum as a "unique selling point" and explains it as an "essential element in city marketing", as a "tourism highlight" and as a "building block of the art and culture city of Filderstadt".

According to Ina Penßler, the aim of the new Filderstadt Museum is to appeal to a wider range of people who are interested either in art, the history of art, local history or screen printing practice. Exhibitions will be developed, compiled, and then presented from the rich Domberger collection (with around 2,000 individual pieces) alongside pieces by other cultural workers.

You can visit the opening show from 22nd May – 14th August 2022 at Uhlbergstraße 36 to 40 (the same place as the traditional Domberger company). Curator Dr. Johannes Stahl believes the show will lead to the beginnings of artistic screen printing in Germany. In the 1950s, older American screen prints provided the decisive impetus for an intensive collaboration between the Stuttgart Academy Professor Willi Baumeister and Luitpold Domberger. Starting out with the simplest means, the two printing pioneers in Germany used a new technique, craftsmanship and artistic inventiveness. This meant new standards were finally set in Filderstadt. A screen printing company and a meeting place for renowned artists from all over the world had started to develop.

The opening was on May 22nd 2022 and featured the curator of the exhibition (Dr. Johannes Stahl) and members of the "Kunstkollektiv Klub7" who were on site in the Serigrafie-Museum. The cultural workers impressively demonstrate the possibilities of working in different layers, regardless of whether this is done by means of artistic screen printing or with other forms of expression. Visitors can experience short tours, technology presentations and items such as postcards can be purchased in the museum shop.

No less than 212 colours

A highlight of the premiere show is undoubtedly a large-format screen print by the American artist Richard Estes: the famous "D-Train". The curator explains "No less than 212 colours, each with its own printing processes, were necessary to bring the photorealistic impression of the work to fruition." Johannes Stahl adds "The special feature of the exhibition is that the existing screen can also be seen. It gives an idea of the feeling for technical innovation and the claim to explore all the possibilities of artistic screen printing."

Richard Estes was born in Illinois in 1932, the artist studied at a classical academy in Chicago. His career soon led him to New York, a city where he began to paint photos in the 1950s. Impressed by Andy Warhol's Pop Art, Estes developed a characteristic which was an extremely detailed and naturalistic style of painting. This also influences in his work "D-Train".

In addition to this, according to the curator, a portfolio of the experimental Soviet artist group "Movement", which existed between 1962 and 1977, can be seen in the Serigrafie-Museum Filderstadt. The expert recalls "In amazing room installations and performances, they drew attention to themselves. In addition to works by individual group members, two screen prints have also been created in collective authorship and show how the individual motifs come together in the same composition."

A creative quartet behind the scenes

Ina Penßler greatly appreciates her four-member team who work at the Screen Print Museum. The team does a lot of creative work and focuses on the “behind the scenes" of the cultural sector. It also explores numerous other areas such as, frames, hangs, signposts, stages of the entire interior design, showcases, photographers, postcards printed for exhibitions and offers a visitor service (including practical demonstrations). The team includes Dr. Gwendolyn Rabenstein, Rebekka Finkbeiner, Birgit Hölzer and Wolfgang Schmidt. The team are all enthusiastic about the diverse topic of screen printing, its colours, its techniques, its possibilities and would like to convey this "addictive potential" to future "guests".

For curator Johannes Stahl, the Filderstadt Screen Printing Museum is a matter close to his heart "I have the unique task of being able to rethink a museum. That makes me a bit proud." For the "doer" and "designer", the "accent of the exhibition" is on art education. For Stahl, it is about "dialogues" between the images and the viewers. "The stories behind the works and their artists are always particularly fascinating," the expert has long known. From his experience he knows "People love stories” and he wants to tell this story in the Screen Print Museum Filderstadt. He describes the local collection as "a kind of huge buffet" where "everything is so delicious".

Johannes Stahl is an expert in the industry, and he personally knows many artists. He has a bit of "reverence" for the Domberger collection. He describes it as "great and unique” and refers to the large spectrum of very different cultural workers. Now people from near and far are invited to get an idea of the first screen printing museum in Filderstadt, Baden-Württemberg, Germany.