Why is 3D printing important to wide format printers?

There is plenty of evidence that wide format printers in particular are moving into industrial applications such as home decor and even clothing. And 3D printing makes perfect sense when seen as another industrial print application.

Anyone who’s visited a print trade show in recent years will probably have seen a desktop 3D printer, typically producing small plastic figurines, and you might have wondered how this could relate to the printing industry. In truth, there is little crossover between 3D printing and graphics printing, but then again there isn’t any reason why printing companies should be limited to graphics applications. Indeed, there is plenty of evidence that wide format printers in particular are moving into industrial applications such as home decor and even clothing. And 3D printing makes perfect sense when seen as another industrial print application.

The basic idea behind all 3D printing is that objects can be designed and sliced into layers in a CAD file, so that a 3D printer can then physically lay each successive layer on top of the previous layer to create that object. There are around a dozen different approaches, each offering their own blend of cost, quality and productivity and each suitable for its own range of materials, which can include a wide variety of plastics and metal alloys, and even electronic circuits.

The earliest technology dates back over 30 years and was originally referred to as ‘rapid prototyping’ which neatly sums up the first target market, product design, where it’s often necessary to generate prototypes quickly. Some ten years ago many vendors attempted to push the technology into the consumer market and came up with the ‘3D printing’ moniker as an easier way to appeal to the general public. There was a limited boom but when the bubble burst many of those vendors went bankrupt. However, the technology continued to evolve, to the point where it is now suitable for industrial use, leading to the latest term, ‘additive manufacturing’, reflecting the increasing number of components that are being made in this way. The 3D printing name has stuck, and many additive manufacturers still refer to their machines as ‘printers’ even if in the graphics sense there’s no actual printing being done.

That said, there are several 3D printing processes that make use of inkjet print technology that would be recognisable to anyone from the graphics world. The most common of these is binder jetting, where the printer lays down a powdered material and then an adhesive-like binder fluid is jetted according to the shape required, glueing the powder together to form a layer of an object. Then the unused powder is brushed off and the bed drops down and the process is repeated. Once the printing is finished, heat is applied to burn off the remaining binder and ensure that the material is fused together to form a solid object.
HP on it.

A good example of this is HP’s JetFusion range of 3D printers with the most accessible being the 300 series, which has a build chamber of 190 x 254 x 248mm and can produce engineering-grade functional parts. There’s a choice of monochrome or colour devices, with an integrated and highly automated materials delivery system so that the printers can run unattended for some time.

A variation on this is High Speed Sintering, or HSS, as used by both Xaar 3D and Voxeljet and working with polymer-based materials. As with binder jetting, this involves first laying out the material powder on the bed and then jetting a fluid to define the shape being built. But in this case, the fluid absorbs infrared heat so that when heat is applied to the powder bed it only melts the powder necessary to form the desired shape.

Yet another approach is materials jetting, which involves jetting a fluid that is highly loaded with elements of the build material. This is significantly more difficult because of the much greater potential for clogging the printhead, not to mention the supply system that takes the fluid from its tank through to the printhead’s fluid chamber. A good example of this is the Carmel 1400 3D printer as developed by XJet, which is available in both metal and ceramic printing versions. 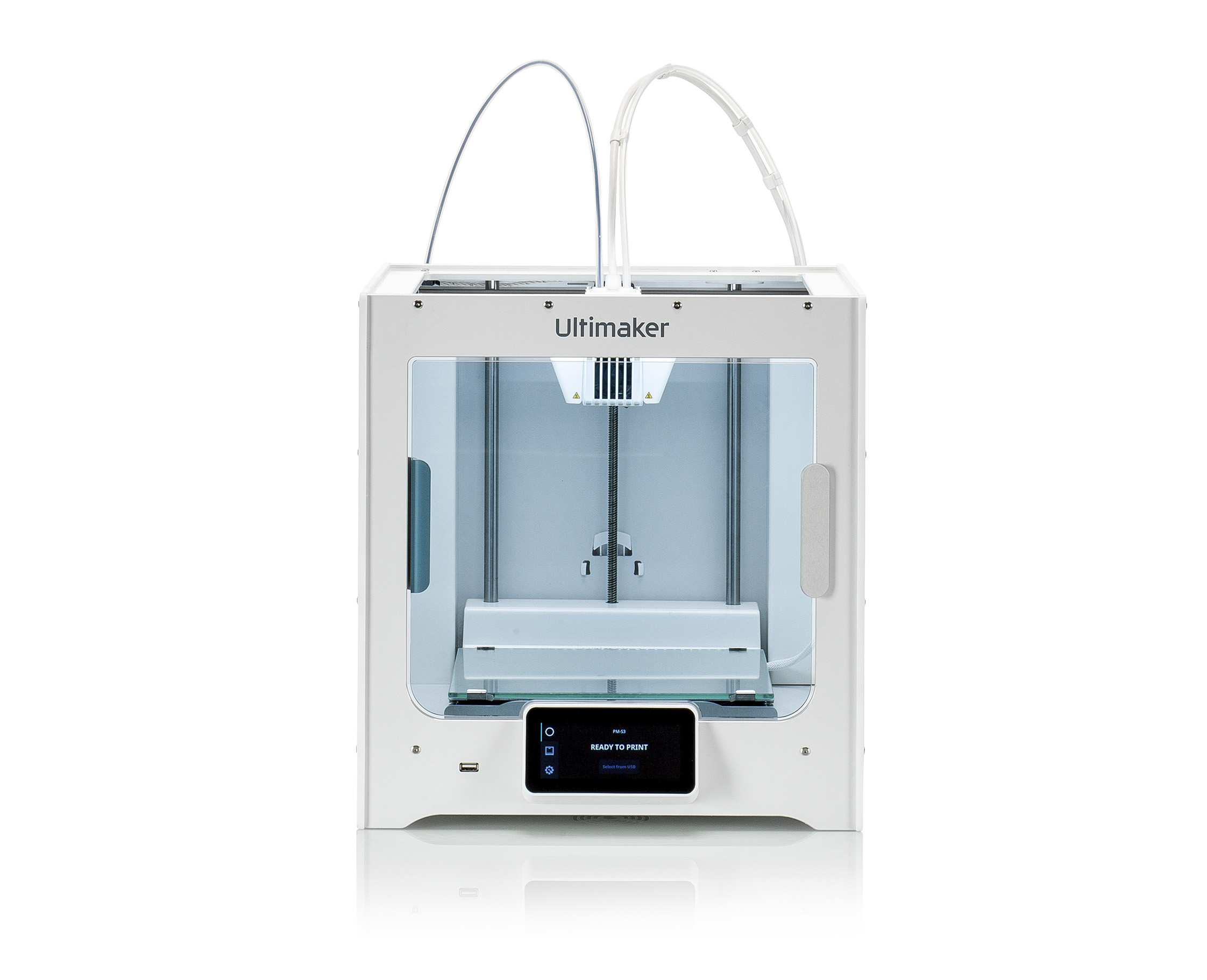 Besides these there are also plenty of desktop models that are relatively cheap to buy and are capable of producing small objects. A good example would be the Ultimaker S3, which uses the Fused Filament Fabrication method, which essentially means that it builds parts by extruding a plastic filament. It has a build area of 230 x 190 x 200mm.

Yet another alternative is MarkForged, an American company that produces 3D printers using the fairly standard fused deposition modelling approach but which has also developed a range of composite materials, such as nylon laced with carbon fibre, for its printers that allow them to produce parts that have an excellent balance of strength, light weight and relatively low cost.

It’s also worth noting that many wide format printing companies are already using the Massivit 1800 3D printer to produce large display objects, mainly for advertising and exhibitions, as well as props for film and TV. This device has a build area of 145cm x 111cm x 180cm, big enough to produce life-size models of people, using a proprietary gel material that cures under UV light. 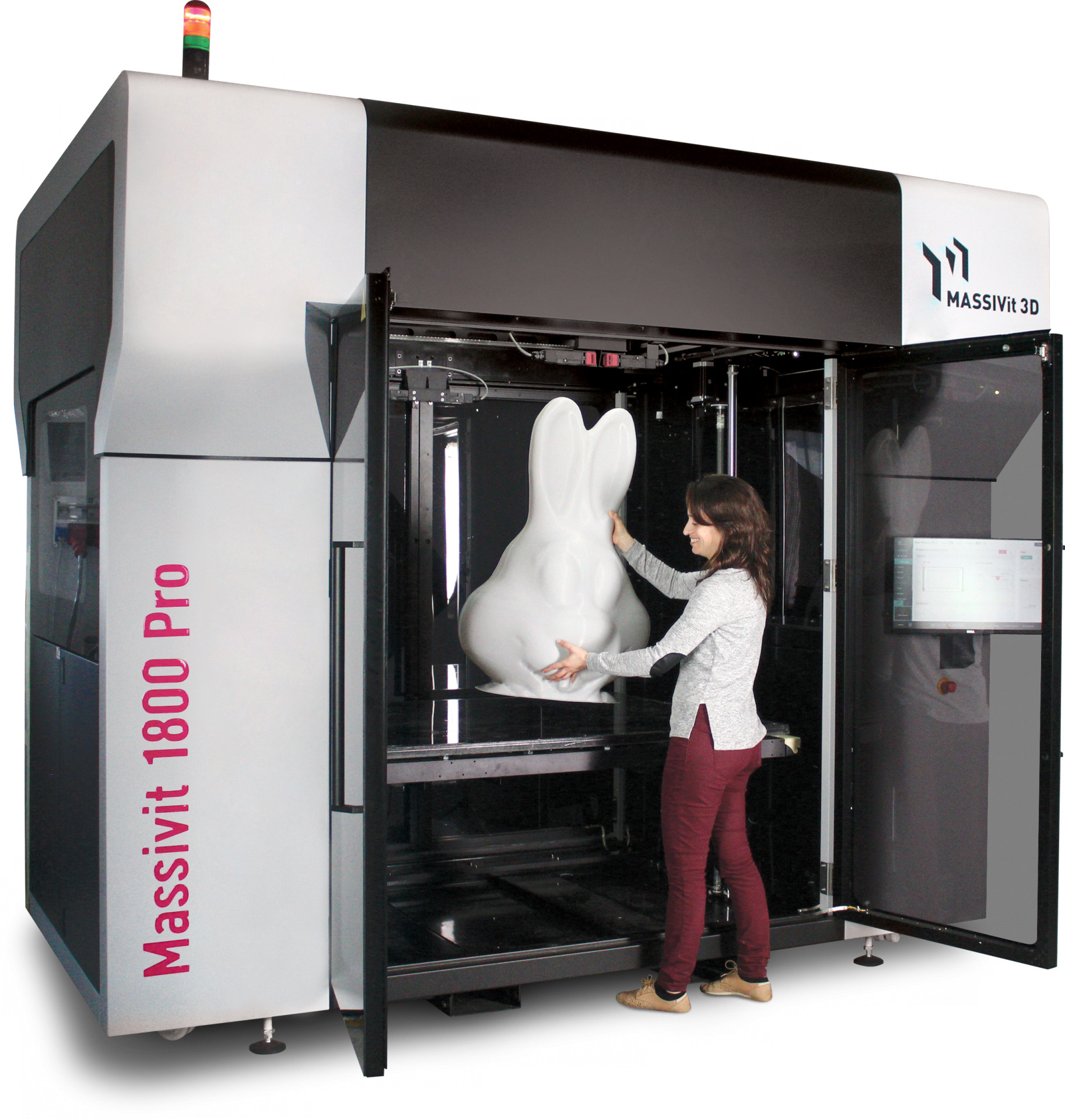 Caption: The Massivit 1800 Pro is a 3D printer for large format displays that features a variable resolution extruder.

There is some skill required in using a 3D printer, but nothing that would trouble anyone with experience in graphics printing. There is some work in preparing, optimising and verifying files, the printing process has to be overseen, and then there’s finishing - all of which also applies to the graphics world. The biggest issue for most people is the need to think in three dimensions, but plenty of people in packaging and wide format printing for point of sale items already work with objects in CAD files.

Over the past 20 years or so we have all seen how digital printing has gradually taken a bigger and bigger slice of the commercial print market. It is inevitable that 3D printing will follow a similar pattern for the same reasons, to cut costs and improve supply chain logistics. It is already widely used in prototyping and is becoming more common for making tools and dies. A small but growing number of manufacturers are now using the technology to make end use parts, taking advantage of the ability to use lattice structures to create lightweight parts, and optimizing the geometry to combine multiple parts into single items at lower cost. This is already being done for short run high value applications such as aircraft parts and extending gradually right through every form of manufacturing from toys to spare parts for printers. And who wouldn’t want a part of that?

Source Information: The Wild Format guides are intended to expand awareness and understanding of the craziness that can be created on wide format digital printing devices, from floors to lampshades and everything in between. These guides are made possible by a group of manufacturers working together with Digital Dots.This article is supported by HP and Digital Dots.