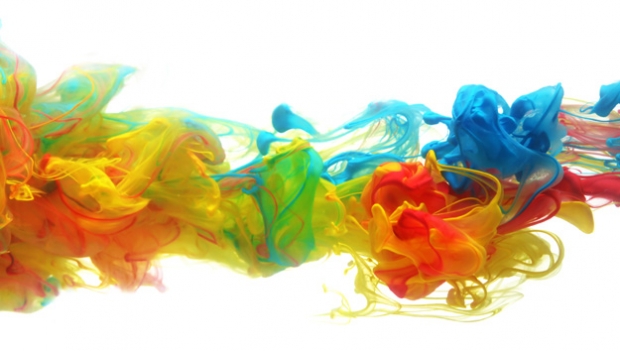 Why is it that if you add red green and blue light together you get white light, but if you mix red, green and blue inks or paints you get black (or dark brown)?

The answer is vital to an understanding of inks for colour printing.

The difference is because of the way light reaches our eyes. If it comes from something shines with its own light, such as the sun, light bulbs or LED signs, it’s called additive colour. This is the light that strikes our eyes directly, like looking at the sun (don’t do it), or a light bulb (safer, usually).

Other sources of additive colour include CRT televisions and monitors, LED based lighting systems and signage, but not LCD/TFT monitors and TVs, which are subtractive colour because they use coloured filters.

Subtractive colour is the way that printing inks work. It’s the same principle as any object in nature that doesn’t shine by its own light, such as leaves, sand, cocker spaniels and tomatoes. Light is reflected from these objects, and some colour wavelengths are absorbed along the way.

Confusing? Yes. Let’s see why. Although subtractive colour is the way that print works, let’s start with additive, as it’s easier to understand that way round.

As we saw in part one, human eyes sense colour as the effect of different wavelengths of visible light. It’s easiest to define these as red, green and blue, and these are also called the primary colours of the additive system. Digital cameras, film and scanners are generally set up to record colour as red green and blue mixes too.

If you mix all three wavelengths equally you get the totality of visible light, which we sense as white. Turning down the brightness of these equal mixes gives progressively darker shades of neutral grey, and no light at all becomes black.

Incidentally there’s a reason why the sun looks yellow if you look at it directly (careful there), but it still illuminates everything with white light. It’s got nothing to do with printing, but for entertainment you can look up Rayleigh Scattering on Wikipedia.

Different mixes of light wavelengths is where the additive part comes in. For example, equal amounts of pure radiant red light plus pure radiant blue light combines (additive) to make mixed colour that your eyes perceive as the red-purple colour we call magenta. The magenta will also look brighter than the separate blue and red components because you’re doubling the amount of light.

If there’s proportionately less blue light than red then you’ll get redder tones that are also darker (because there’s less total light). Add more blue than red and you get purple/violet tones that are lighter. Add some green to the red + blue mix and you’ll get less saturated, more pastel-like lighter tones.

The mixes of coloured light that are particularly significant for printing are the results of blue + green (cyan), red + green (yellow), and blue plus red (magenta). Red, green and blue are usually abbreviated RGB, while cyan, magenta and yellow are CMY.

Cyan, magenta and yellow are the complementary colours of red, green and blue respectively, meaning they appear opposite them on a colour wheel. Also pure cyan reflects no red, pure magenta reflects no green and pure yellow reflects no blue. We’ll come back to cyan, yellow and magenta when we consider process colour inkjets for full-colour printing.

Anyone who mixed red and green and blue poster paints at school will realise that you don’t get nice bright colours that way. You get a muddy dark brown. This is because paint, like printing ink, doesn’t generate light and make additive colours, instead it selectively reflects and absorbs wavelengths. This is called subtractive colour.

Say you have a red ink. It doesn’t shine with red light, it reflects it. When you shine white light (from the sun of a light bulb) onto red ink, what happens is that the blue and green wavelengths are absorbed by the ink, but the red wavelengths are reflected.

This is where that muddy brown starts to appear. If you mix red, blue and green inks or paints (or their opposites, the familiar cyan, magenta and yellow for that matter), then all colours are absorbed, which means you should get black, rather than the white of additive colours. However, paints and inks are not completely pure red, green and blue (or pure CMY), so there’s some reflection and normally you see a dark brown colour.

Finally, note that backlit graphics don’t use additive colours, even though they appear to glow. The backlighting is a white light that then passes through a clear front panel that’s printed with transparent inks. These inks act as filters: they absorb some wavelengths and let others through, so they are subtractive colours.

Similarly, liquid crystal diode (LCD) monitors and TVs also use subtractive colour: they place a grid pattern of transparent red, green and blue filters in front of the liquid crystal array, with a white backlight behind the lot.

We’ll address the importance of transparent inks in more detail when we look at process colours next time.