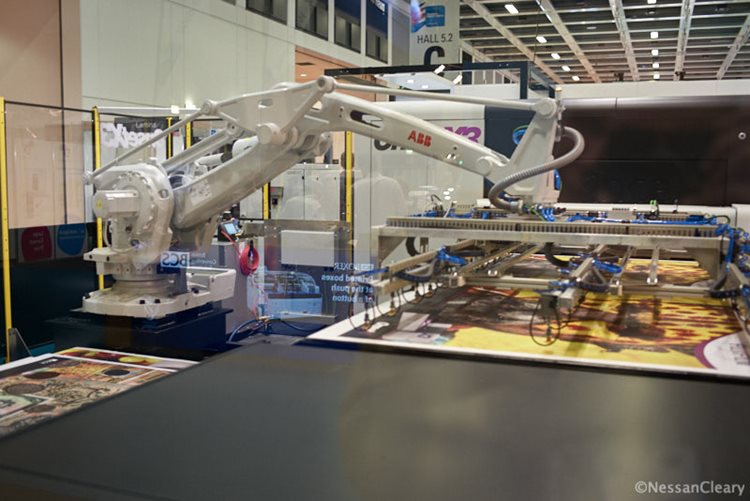 Productivity is a key metric in determining the value of a wide format printer, since the more sellable material that you can produce, the greater the profit from that printer. But productivity isn’t just about how fast the printer can lay down the ink, or how many square metres the manufacturer claims it can produce in an hour. In the real world, productivity is really about throughput and the way that you handle the substrate plays a big role, and particularly how quickly you can take the printed media from the printer to the next process.

However, most printing to sheets or boards on flatbed and hybrid printers still relies on an operator to manually load the blank sheets on and the printed sheets off the printer. But, as Andrew Berritt, global marketing manager for Fujifilm wide format graphics, notes: “The faster you go, the more automation you need because people can’t keep up with it.”

Peter Bray, managing director of Durst UK and Ireland, says that the choice as to which level of automation to use mainly comes down to the target applications and how often customers switch between those applications, noting: “If a customer decides for full automation, they don’t want to be switching from one material to another because the whole purpose is to place a stack of material into a feeder and then it prints and goes into a delivery system. But if they were changing from flat sheet to roll, or one size to another, then the benefit of the short set up time from full automation would reduce.”

Bray says that those customers who opt for full automation tend to only work with two or three materials, adding: “It’s mainly corrugated boards because they want as little interaction as possible.” He continues: “Customers with good volumes who want flexibility will go for three-quarters.”

One limitation is that the height of the materials should line up with the height of the printer bed so that the substrate can be fed directly into the printer. For very thick materials this can limit the number of sheets that can be piled on to a pallet. Some customers have dug out a pit to lower the feeder pile to overcome this.

Some loading systems can allow two separate pallets to be fed side by side into a printer. The materials have to be the same but this allows two completely separate jobs to be automatically fed into the printer simultaneously with each delivered after printing to their respective pallets ready for the next stage.

The loading and unloading system is usually integrated into the press controls, though there will be some controls directly on the system itself, such as the emergency stop and the set-up for the media size. Depending on the loading and unloading system itself, it might be possible to re-use the system with another printer, if the printer itself is subsequently replaced. However, as Bobby Grauf, sales manager for Agfa UK and Ireland, points out: “As the press gets faster, the automation needs to be able to keep up as well.” 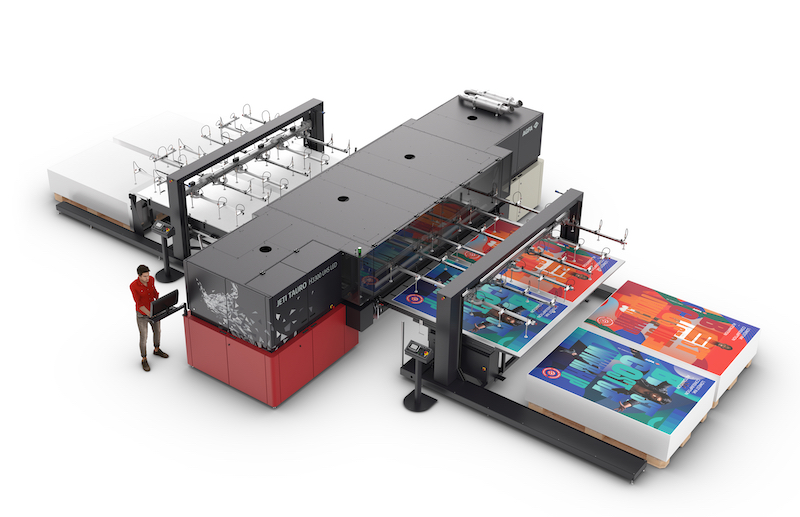 Grauf says that there is some regional variation, with the majority of customers in North America and Europe opting for full automation, whilst most British customers choose semi-automation or manual loading, though this may change as Agfa’s faster Jeti Tauro UHS starts to ship.

There’s a limited number of companies that can produce such systems. The German company Hostert, for example, makes a dedicated automatic loader, and a separate automatic unloader, which can be used separately or together. These systems can handle different media, including foam PVC, corrugated carton, thick paper and compressed cardboard, all up to 25mm thick and 20 Kg in weight. The boards can be re-loaded. Options include a pit-installed lift table or a built-in palette function to re-locate the lift table.

Hostert also offers a single automatic system that can be used for either loading or unloading. This consists of an arm that can pick substrates up from a pile on a palette, and deposit them on its own bed from where the media can be pushed onto the device in question.

Hanglory, based in China, has developed the HT2500 Robo system, which consists of an auto Loader and separate auto Unloader which can handle media up to 2.5m wide and 50mm thick, and up to 20Kg in weight.

Yet another option is to use a robotic arm to take the printed board off the printer and to place it onto a cutting table. Most robotic arms are designed for industrial applications so they offer long life with little maintenance, which makes for a very flexible and cost-effective solution, even taking into account the cost of integrating the control systems to synchronise the loading with the printing.

Robotic arms work well for true flatbeds where the substrate is loaded and unloaded directly from the bed. Canon, for example, has demonstrated a robotic system at a previous Fespa show with a single robotic arm placed next to an Arizona flatbed so that it could load the media to the printer, and then unload it direct to an Océ ProCut cutting table. But a hybrid printer would require either a separate loading system or a second robotic arm as the sheets must be passed through the printer itself. For health and safety reasons, the area around a robotic arm should be cordoned off, so the more robotic arms in use, the more space is required.

In addition, a robotic arm has to be programmed for each individual sheet size so this solution works best for those customers who print more or less the same application. Robotic arms can handle different stack heights regardless of how thick the material is.

Fujifilm offers robotic arms for use with its Onset series of high productivity flatbeds. There are several options, including three-quarters with a lay table and a robot off-loader, or full automation with a Hostert AutoLoader and either an Auto Unloader or an ABB robot arm. Or alternatively, Dual Pick full automation with two robot arms for loading and unloading. Fujifilm is also introducing a new system, High Five, which uses two robotic arms but with six rather than the current five axis, which will allow the arms to turn the boards over for double-sided printing and to reverse the boards before stacking them. 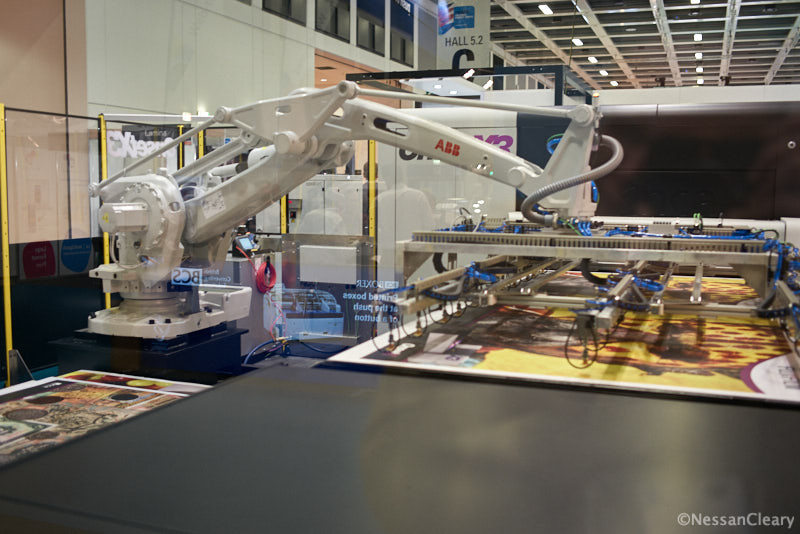 Berritt says that about half the customers use full automation and half of those again have a dual robotic set-up, which is the most expensive approach but also allows for the greatest productivity.

Berritt says that a great deal of development is now focused on this automated loading to reduce the time in between prints and increase the overall productivity. He points out that this increases the burst capacity of the printers for rapid turnaround of work, noting: “A lot of customers use it to win jobs by being quicker than their competitors.”

In conclusion, there’s clearly a place for both approaches with auto loaders being more suitable for flexible sheets, as they can pick up the edge of the sheet and drag it onto the bed, whereas robotic arms are better suited to rigid boards such as corrugated.