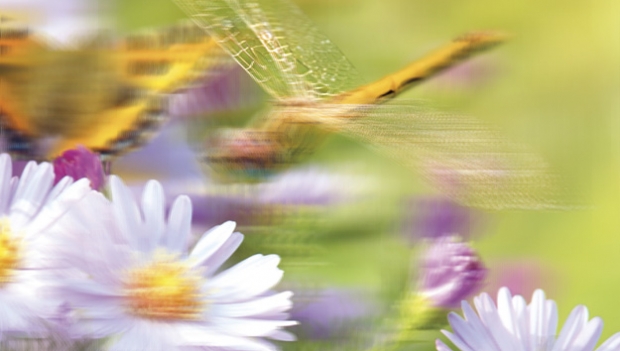 Is print a static medium in a moving world, or flat in a 3D universe? There are ways to achieve the illusion of both motion and depth in print, using optics.

The method is called lenticular and the effects can be any combination of motion, stereoscopic depth (3D), and sudden changes (flips).

It’s particularly suited for use with modern high resolution UV inkjets, which can print directly onto plastics. In the first of two articles, we initially look at what lenticular printing is and how it is produced.

Lenticular print combines a clear plastic lens front layer with a printed backing layer. The print may be onto conventional paper which is then carefully aligned and laminated to the plastic lens material, or it may be directly printed (often by UV inkjet) onto the smooth rear face of the clear plastic. The effect works equally well with front or backlit prints.

Many people will have first encountered lenticular print as children, in bubblegum cards and novelty toys where the image flips between two or three scenes depending on how it is angled towards your eyes. This is still the most common use: novelty greetings cards, book covers or 3D images of dolphins and tigers. Most are just poorly produced kitsch, which is a pity because properly done large format lenticular can make a very attractive artistic or promotional medium.

Stereoscopic 3D can work particularly well with large lenses, though most retail customers prefer one of the animated techniques because movement is more eye-catching and the effect works at mist viewing distances. 3D is more subtle and doesn’t work at all viewing distances or angles.

The print in a lenticular image is conventional, though the image creation stage is exacting. It splits a set of different images into narrow stripes, then arranges them in side-by-side sets (called interleaving).

The illusion of motion or flipping comes from changing the viewpoint of your eyes: either by walking past or towards the print in the case of posters, or by moving your head or hands in the case of small portable images. As the print moves, the diffraction of the lenses directs different image stripes towards your eyes, and the image appears to change.

Depth for the 3D illusion is achieved by parallax: each of your eyes sees a different light path through the lenses, one set for the left half and the other set for the right, which your brain interprets the result as stereoscopic depth.

As a general rule, for motion the lenses will be arranged vertically for poster-type images that people move past, or horizontally for r. those they walk towards. With stereo 3D the lenses always run vertically.

Different lens pitches and thicknesses are available - you’d use a low pitch (20, 30 or 40 lpi) for display work intended to be viewed at a distance, and a higher pitch (40 up to 150 lpi) for smaller items such as A4 prints and magazine covers, DVD covers, store cards and novelty bookmarks. The 150 lpi lens from Lenstar is only 262 microns thick, but requires a high res printing process for smooth effects.

Low lens pitches such as 20 to 40 lpi mean that the plastic has to be thicker and in turn it costs more. However, these work well for large format display work that’s intended to work from a distance. A greater distance also means that the viewer doesn’t notice the lens divisions as much, so the image looks more natural.

DP Lenticular, which distributes Lenstar in EMEA, commissioned the development of a 28 lpi lens material that managing director Daniel Pierret is particularly proud of. “It only took six months from our asking for it for the first lenses to come through,” he says. As an intermediate between the established 20 and 40 lpi materials, 28 lpi is thinner and so cheaper then 20 lpi, but thick enough to allow wide angle viewing, plenty of frames and smoother transitions or more 3D parallax than 40 lpi.

So a limited five-frame animation with a 20 lpi lens would have stripes of 1/100th inch width. As you'd want some detail in each stripe, you need a high true resolution to achieve that from an inkjet. A 1,000 dpi resolution still only gives 10 image-forming spots per 1/100th inch stripe, though multiple passes can boost this.

Epson’s Stylus Pro and SureColor printers tend to be popular for short run lenticular work because they have a maximum resolution of 2,880 dpi. However the water-based Epson inks won’t print directly onto the plastic lens, so paper lamination is needed, This has to be done very accurately so the sets of stripes align to the lenses.

Large format but short run lenticular work was commonly done on digital film recorders such as the Durst Lambda. However these are out of production and getting rarer out in the real world. As UV inkjets have increased in resolution and quality, they have become more and more suitable for direct printing onto the back of lenticular lens material. Again, alignment is critical.

According to DP Lenticular’s Pierret: “For large formats we see two evolutions. The resolution is increasing, yes. Not just the physical resolution but the interpolations, so there is difference between the print and the head directions. You need to know the real resolution in order to calculate the file resolution.

“Also very important is the printing speed. These are important changes. Reducing the drop size and increasing the resolution is important. This impacts on speed. The makers want to go fast and lenticular is a very small application for them, so they will not produce specialist products.”

With offset litho printing you've got a genuine resolution of 2,400 to 3,000 dpi and conventional AM or FM halftone dots to work with. UV inks can also print directly onto the plastic. However, the economics of UV litho mean that it’s only likely to be used for fairly long runs.

Forward Optics in the USA has developed a very thin and flexible lenticular film suitable for use as labels, so security or promotional use. It can be printed by flexography if needed. DP Lenticular is the European agent.

Another product from Forward Optics is MicroLux, a so-called fly-eye sheet that is similar to lenticular but with a series of hexagonal lenses. This gives a repeating pattern with an illusion of depth and is useful for security labels or eye-catching covers and packages.

Lenticular tends to go in and out of fashion over the years. The ever-improving resolution and quality of UV inkjets means that it’s never been easier to print large lenticular displays.

However, the set-up stage and the testing needed mean that lenticular printing remains a specialised business that costs serious money to get into. According to Andrew Roblett, joint MD of large format lenticular specialist Riot of Colour in London: “If you buy HumanEyes software it’s £20-30,000 to get it running with the machinery, and then you look at the size of the likely market and realise it’s better to come to us. If you can fill say an Agfa flatbed with regular print work, then you’ll make more money.”

Riot of Colour produced the huge Avatar 3D lenticular high street poster and has worked for prestige clients on similar products since. Even so, Roblett says: “Lenticular is long-winded, incredibly time-consuming and there isn’t much profit! We’ve stuck at it because I’m stubborn! Lenticular is perhaps 40% of our business, including trade, outdoor, agency, fine art, everything. I think packaging is going to be big in future.”

It’s also impossible to deny that large format digital LED signage is becoming more and more common. That can match and exceed the animation or movement of lenticular, while allowing the whole display to be changes every few seconds if needed.

On the other hand lenticular can be placed virtually anywhere and doesn’t need a power supply. Digital displays are of no direct benefit to the printing sector, but lenticular is real printing.

This 5 x 2.4 m promotional 3D lenticular poster was believed to be the world’s largest when it was made in 2010. It was printed by London based specialist Riot of Colour to promote the DVD release of the 3D movie Avatar in the window of the HMV store in London’s Oxford Street. See: www.riotofcolour.com

It’s hard to show lenticular on a 2D screen, but this apple image is used in a commercially produced stereo lenticular print from Elmar Spreer at www.lenticular.de

A 2D representation of an interlaced image of a dragonfly on flowers, produced by Pixalen Studio in New York: www.pixalenstudio.com

Mass-produced lenticular images are often produced in China or Eastern Europe. These low-cost framed lenticular pictures, seen in a UK store, have a higher photographic and 3D quality than many, though the images remain relentlessly kitsch!