Choosing the right small flatbed printer for your business 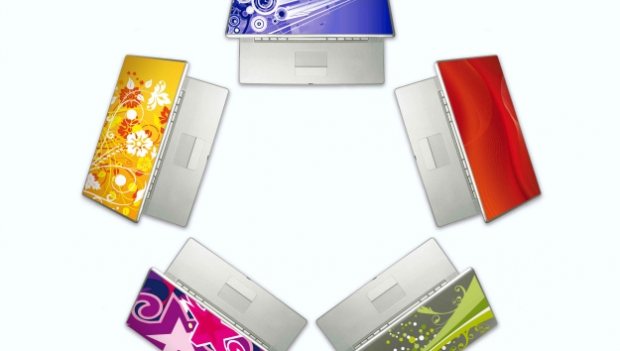 In the first of two articles on small format flatbed inkjets, Simon Eccles looks at the uses of these devices, plus offerings from the biggest players.

Small format flatbed inkjet printers have distinct character and range of special applications of their own in a way that you don't see with, say, the narrowest versions of solvent roll fed printers.

The compact dimensions of the smallest A3 bed models means they'll fit into places where you wouldn't put a wide format printer, and the relatively low entry prices mean that they're attracting the sort of user that can't accommodate or perhaps can't afford a "conventional" flatbed.

Just as more importantly, these baby flatbeds are built to take deep, often three dimensional objects that are located on the beds by vacuum and jigs.

This materials handling ability more than anything else is driving the applications, which include objects such as phone and tablet cases, laptop lids, leather folder, book and iPad covers, pens, USB sticks, golf balls, plaques, ceramic tiles and plates, trophies and office nameplates. For more industrial purposes, the printers can be used for backlit instrument panels, touch switch panels, component marking and the like.

They will print on anything that's relatively small and solid, really. Most of these small printers use UV-cured inks, which sticks to many surfaces, while some (such as Mimaki) can optionally print a primer fluid that increases the range of substrates that can be handled. Copytrax offers both strong solvent and water-based gel inks as well as UV curing.

Modest curves can be printed on, but not anything with a significant variation in height as the accurate "throw distance" of the ink droplets is relatively small, as with any inkjet. For example golf balls can only be printed in a fairly small circle around the highest point, and not the whole of one hemisphere.

All this class of small flatbeds have vacuum beds, but if you're printing multiple small 3D objects you'll need a jig to hold them in predetermined positions, so the printed image is applied to the right areas. Jigs can be made from wood, foam, metal or Perspex.

The jig is linked to the design system or Rip through simple templates that position the artwork objects to align with the physical jigs. Mimaki demonstrated a jig-free camera based position locator and automatic registration system at drupa 2012, but hasn't released it as a production system so far.

The FESPA Digital event in Munich this year saw the latest arrival to the baby flatbed party. Mutoh announced its ValueJet 426UF, a keenly priced A3+ flatbed printer that fills a gap in its range where it couldn't previously compete with its fellow Japanese rivals Mimaki and Roland DG.

This new model is due to ship in September 2014 and we'll look at it in more detail in part two, together with the equally interesting products offered by some of the smaller European developers: Copytrax/Azon and Bergstein. 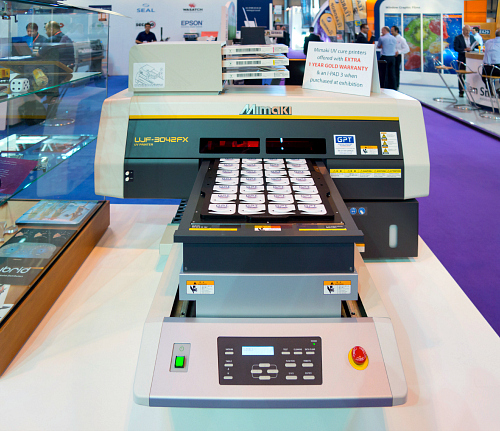 This Mimaki UJF-3042FX has a jig on its bed to position small gift items - in this case paper cutters.

Actually Mutoh has come rather late to the party. Mimaki announced its first A3 flatbed, the UJF-3042, five years ago and has since revised it with a couple of variations as well as an A2 version. Mimaki itself wasn't the first to build a small format flatbed, as there had been attempts to get small solvent flatbeds off the ground in the early 2000s.

However, Mimaki's combination of UV inks and LED curing lamps with a deep adjustable-height bed, coupled with its marketing clout, made the UJF-3042 an instant sales success. Priced below €30,000, these printers sold as quickly as Mimaki could make them for the first year or two.

All models print a maximum of 1,800 dpi and offer CMYK plus light cyan and light magenta and will optionally print a primer coating if needed.

The original UJF-3042 prints either white or clear ink, while the other two can run both in the same unit. There's a choice of high durability, stretchable or wide gamut inks, and the white has recirculation.

According to Mimaki, the UJF-6042 can print a complete bed in between 2 minutes 30 seconds and 7 minutes 37 seconds depending on the quality settings. 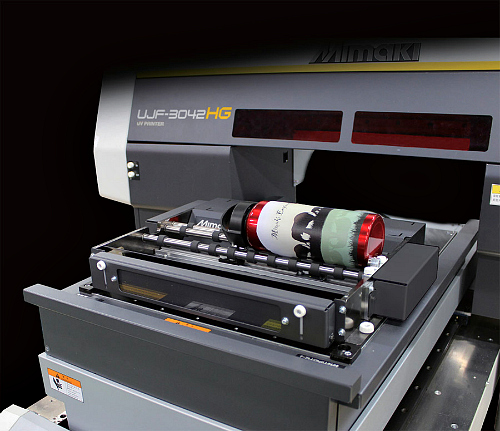 Kebab fits on the deeper beds of the Mimaki UJF-3042HG and the UJF-6042 and includes motors to rotate cylindrical items.

In some markets Mimaki offers optional "Kebab" holders for the deep-bed UJF-3043HG and UJF-6042 that can rotate cylindrical objects such as wine bottles, candles or cardboard tubes under the heads. Cost is about €3,800 and it takes objects from 10 to 110mm diameter and up to 330 mm long.

Foiled metallic effects are popular with personalised giftware, but none of the small flatbeds have metallic inks yet. However at the end of last year I-Sub Digital, a UK based Mimaki dealer, launched Digi-Foil, a range of metallic and decorative foils that have been specially developed for use with the UJF-3042 and 6042 models.

This uses a heated applicator for a largely manual process after initial printing. A special adhesive ink is used in the printer as a separate pass, allowing prototypes, one-offs and short runs of foiled work to be produced without the need for hot foil dies and presses. I-Sub says that the foiled area can be anything "down to a single dot." 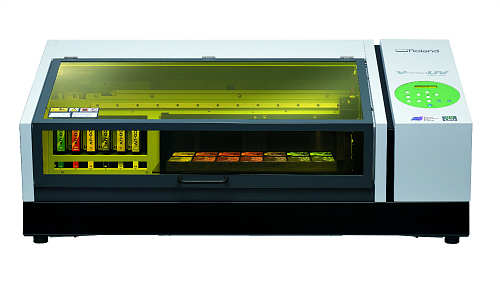 Roland DG's first small UV flatbed was very small indeed. The VersaUV LEF-12 has an A4 printing area. It was initially priced at little less than the larger Mimaki UJF-3042 models, which limited its appeal despite some nice features such as a sealed lid and optional carbon filter to reduce dust and ink mist.

The LEF-20 takes objects up to 100 mm high. It offers CMYK plus white and clear ink, in 220ml cartridges. With both the Roland models there's a choice of matt or gloss finish when curing the clear coating.

In Part 2 we'll look at further options in the baby flatbed category, together with a look at where they fit alongside existing analogue and alternative digital processes.