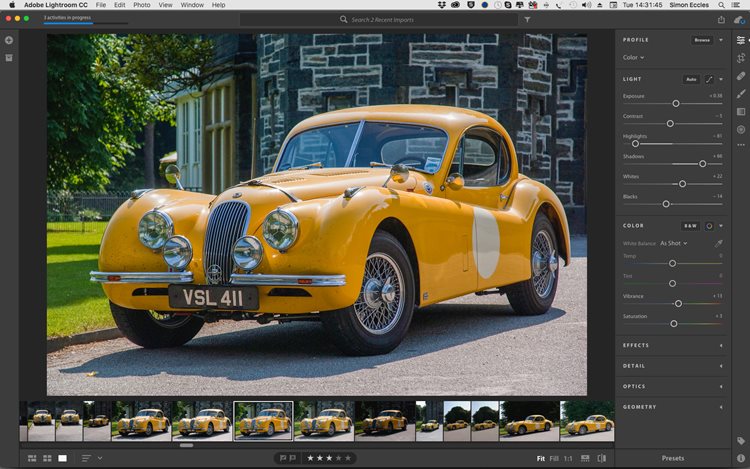 This is the third part of the FESPA guide to print file formats. Please also refer to part 1 and part 2.

Portable Graphics Format. A file format introduced as an improved replacement for GIF, avoiding its patent problems. It supports full 24-bit colour (or 32-bit with an Alpha channel), and uses lossless compression.

It was originally intended as an Internet format and does not support CMYK colour spaces. However, it prints perfectly well and is sometimes used for file delivery by designers. Layout programs such as InDesign, Illustrator, QuarkXPress and CorelDraw can import PNGs and colour separate them to CMYK on export to native files or PDFs. Since 2003 it’s been an ISO standard, currently ISO/IEC 15948:2004.

Once a very important file format for printing that underpinned the desktop publishing revolution in the 1980s and early 1990s. You’ll probably never see it today, except just possibly as an intermediate format in the creation of PDFs if you use the archaic and clunky Distiller program supplied with Adobe Acrobat (which can also handle the related EPS). Distiller and PostScript are best avoided today, because any design or layout program you’re likely to encounter can export PDFs directly. 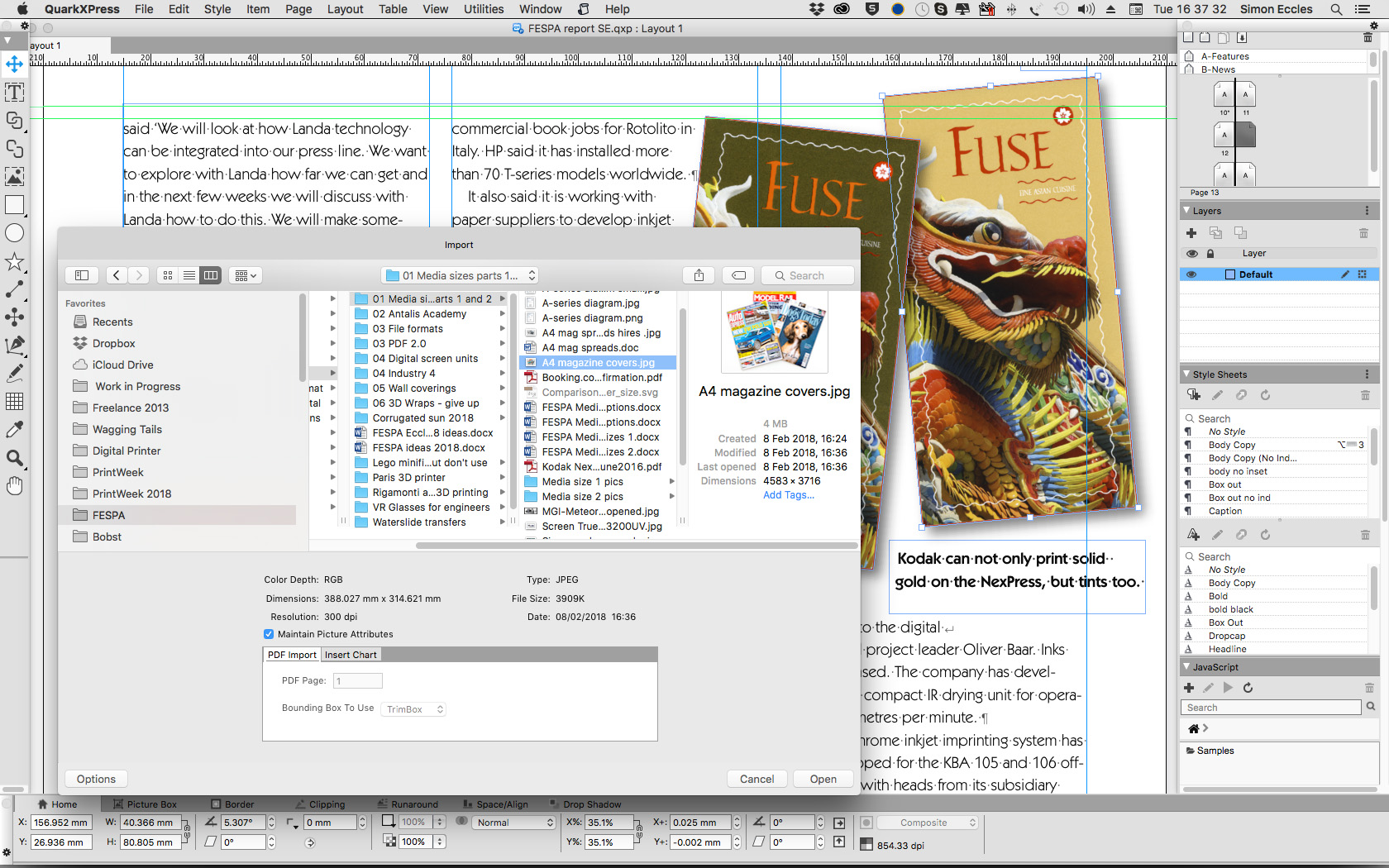 Caption: As with any other layout program, QuarkXPress can import and place a range of image file formats.

QuarkXPress layout files contain layouts with links to external graphics. This is a widely used program that has been available since the late 1980s. Consequently you may be send some old files. Today’s QuarkXPress 2018 cannot open files earlier than Xpress 9 from the late 2000s. Fortunately Quark offers the free QuarkXPress Document Converter 1.2 which converts Xpress 3,4,5,6 files into Xpress 9.1 which can be opened by the later versions of Xpress.

Raw is the generic term for the image files captured by digital cameras. These preserve all the image information captured by the camera’s sensor (usually a CCD or CMOS device), normally without applying any post-processing. You can’t print or place these files directly, they always have to be converted into a more universal graphics format.

Every camera manufacturer has one or more Raw formats. A few mobile phone cameras can also export Raw. Adobe also offers its DNG (see elsewhere) as a universal Raw format.

Generally the digital camera will apply automatic enhancements to its Raw images and save them as compressed JPEGs onto the memory card for transfer to external computers. This is good enough for most purposes, even professional print, but many photographers prefer to process Raw files manually themselves, so they can choose which enhancements to apply. This is the modern equivalent of darkroom printing with selective exposure in an enlarger.

Most professional digital cameras offer the option to save and export their Raw files, sometimes in addition to processed JPEGs, so they can be post-processed in a computer.

Typical file extensions for Raw files include ARW (Sony), CDR (Canon), NEF (Nikon) and ORF (Olympus). Cameras will usually be supplied with software to open their own Raw files, then enhance, resave them and export them to a non-proprietary format such as TIFF or JPEG. However, a more consistent option is to open and process Raw with Adobe Photoshop’s standard Camera Raw extension or Adobe Lightroom, both of which can open almost any Raw format and offer extensive enhancement controls.

Other commercial programs that open and process Raw images include CorelAfterShot Pro (formerly called Bibble Pro), DxO Optics Pro, Phase One Capture One, Photo Ninja, SilkyPix Developer Studio and MagicRaw. Not all of them support all formats.
Current Apple Macintosh and Microsoft Windows operating systems can open nearly all Raw formats directly into image editors. These are updated periodically as new formats are released.

Rich Text Format. A word processing document exchange format developed by Microsoft Word, that preserves text attributes such as font, style, size, some layout formatting. It includes embedded JPEGs, though not all third party programs can read these. It was intended to share documents with other Microsoft applications, but third party word processors and some layout programs can also read and write it.

An open standard vector graphics file format mainly intended for use with Web pages, where its unlimited scalability with perfect lines and curves is preserved. All current web browsers can display SVG.

Adobe Illustrator, CorelDraw and Inkscape can write SVGs. They can also open them and export them as printable formats such as AI, EPS etc. Microsoft Office programs can open and place SVGs. InDesign accepts SVGs indirectly if they are opened in Illustrator then copied and pasted into InDesign. Photoshop CC can open SVGs but converts them to bitmaps.

An obsolete native file format for the old PagePlus layout program. No longer supported in current Serif programs. Advice is to use the original program if available and export documents as PDF or SVG.

Native file format for Affinity Photo bitmap program. Can also be opened by Affinity Designer to have vector elements added. 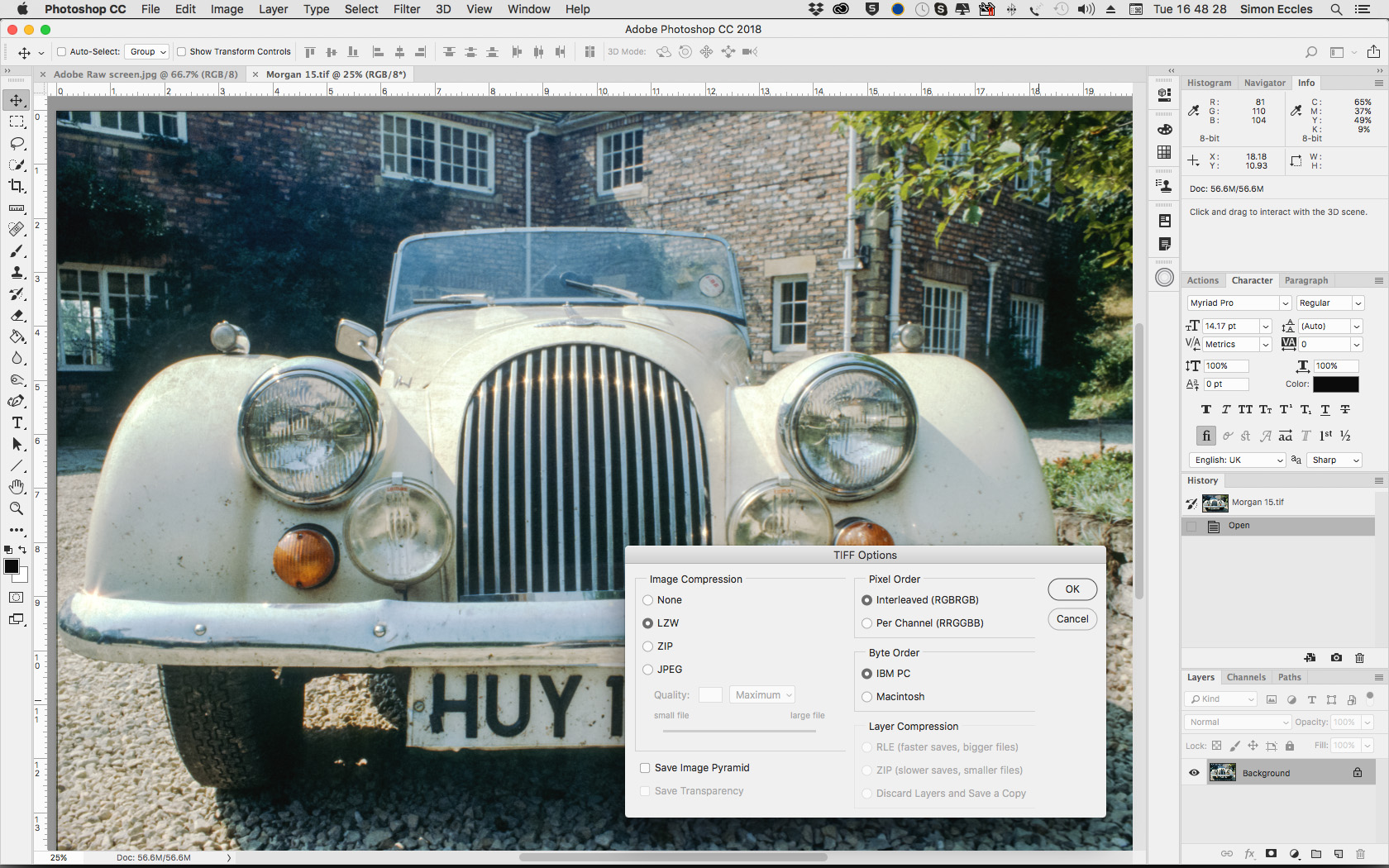 Caption: TIFF can be saved with lossless LZW compression to halve file sizes.

Stands for Tagged Image File Format. An important interchange file format for raster images (ie photographs), because unlike JPEG it preserves the full image quality of the file. It can also preserve layering, paths, channels, 48-bit colour and some other attributes that are lost if you convert to JPEG. It’s also a good alternative to the .PSD native Photoshop format because it isn’t dependent on continuing Adobe subscriptions.

Many image editors can import or save TIFF images. Most layout programs can place them into documents. Note that complex TIFF files with multiple layers may not import the way the originator intended. It’s best to ask the originator to flatten the file (render to a single layer) before sending it for print – that way the originator knows which layers to switch on or off and can check the final appearance id correct.

Alpha mask channels normally work fine (for cutouts), but check the appearance if they are placed into a document layout page. If the alpha channel creates additional spot colours, check that the client really wants these (and is prepared to pay for them in the case of non-digital print processes such as litho or screen).

TIFF file sizes are much larger than compressed JPEGs. Photoshop and most other image editors can optionally save with LZW lossless compression, which approximately halves the file size without affecting quality.

A 16-bit vector file format used by Microsoft Word, PowerPoint, and Publisher. It was partly replaced by the 32-bit Extended Metafile Format (EMF). It can also contain bitmaps. It’s rarely seen in jobs sent for print. It can be opened by some third party apps (such as Adobe Illustrator) as well as the Microsoft applications.

Stands for eXperimental Computing Facility, the operation that created it. It’s the native file format for Gimp, one of the most popular free image editing programs. It can store all colour models, plus each layer, the current selection, text, channels, transparency, paths and guides.

Stands for Extensible Metadata Platform, a format for exchanging metadata between different applications. Adobe developed it, although it was later handed over to become an ISO standard (currently ISO 16684-1:2012 part 1 & ISO 16684-2:2014 part 2). It can be used to store the origins of a file, and to add to this as the file is edited.

XMP data can be embedded inside document files, including JPEG, PDF and others. Alternatively it can be stored alongside the original file as a “sidecar file,” with the extension .XMP. This is why you sometimes see an XMP file alongside the image file in a folder, though it doesn’t contain the document content itself.