How to calibrate greys with confidence 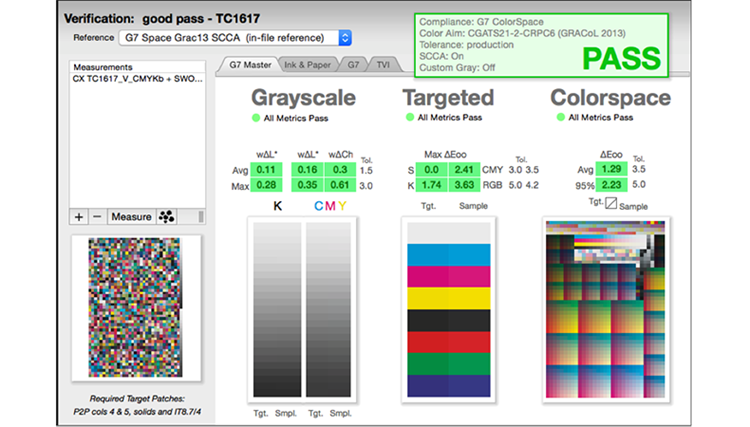 Achieving accurate spot and brand colours is one of the driving forces behind effective colour management. However, ColorThink creator and CHROMiX owner and President Steve Upton says that for most day-to-day applications, there are actually more important considerations.

“The reality is that it’s not the solid colours that customers care about as much, although brand colours can be an exception without a doubt. It’s actually the colour balance and the tone balance – in effect, the greys – that really makes a difference with imagery,” he says.

When it comes to those greys, one calibration technology in particular leads the way: G7.

“G7 was invented by a colleague and a business partner of ours, Don Hutchinson. Don was a scanner operator many years ago and has been a colour consultant for the 25 years since, as well as an active photographer. Don realised that we grey-balance all sorts of things – cameras, monitors, scanners – but grey wasn’t a baseline measurement and it wasn’t a calibration goal for printing presses.

“That drove Don crazy because he knew that grey is a vitally important ingredient for colour perception – the eye will balance to the paper white but also to the things that are expected to be neutral. So, he wanted control over it, and he worked for years on this method for calibrating presses.”

There are two ways of making grey: either using black ink by itself, or using a balance of CMY, where cyan is 50% and magenta and yellow should be 40% each. Don’s G7 calibration method involves printing a set of tonal gradation patches of CMY values from 0 to 300%, and a ramp of K values from 0 to 100%. These are measured and a back calculation is made to understand the curve correction needed to put into the RIP.

“The cool thing about G7 is that it is totally dependent on the substrate colour and the maximum density that the print system can handle. Some people would confuse G7 with certain colour spaces like GRACoL, but G7 is a calibration method that does not dumb down your printing system in any way.

“G7 bases the default behaviours to the white point of the paper, and it bases its maximum density on the maximum density of the target print that you measure. It then strings a curve between that, like a clothes line, and it calibrates the system from there,” Steve says.

“G7 gives you a nice pleasing curve shape. That is very similar to normal press behaviour, except that the highlights are quite stable between different printing systems. So if you have a high-density printing system that goes to very black, and then you have printing on newsprint that goes to, at best, a dark grey, the 0-50% of greys on those two systems will be very similar when calibrated by G7, and then 50-100% of it scales up to whatever the darkest possible is. That makes the presses look very similar, even if you’re not doing fancy colour management.

“Then, if you take a print job from the newsprint press and move it onto a higher-quality coated paper press, because the greys are neutral and the curves are made in a similar manner, everything looks surprisingly similar, and it makes printing easier.

“It makes make-ready shorter and a lot less paper is wasted. Equally, if you have different printing presses in an organisation, they might be similar but just slightly different. If you G7-calibrate the presses and the inks are similar colours, you can move jobs between those presses quite easily and get a similar colour appearance.”

Ahead of the curve

Originally G7 was created with offset and gravure printing in mind, but it has equal utility for screen printing, flexo and even inkjet. Don took the idea of G7 to Idealliance, who agreed that print standards should be based on it and adopted G7 as an open standard. But in terms of making a practical solution to use G7, Don also collaborated with Steve to create CHROMiX’s Curve G7 software, which is now in its fourth generation.

“Although G7 is open spec, Curve was the first G7 calibration tool. Now that we have real metrics, we can apply them and that’s what Curve 4 does,” Steve says.

“With Curve 4, we added the ability to measure directly within the software, and then we added an explicit verification tool that you can measure a quick strip of patches and it will tell you what level of G7 compliance you’re within. It’s a matter of measuring the tone shapes of these curves and ensuring that they are within the right distance from a G7-calibrated system, and then also measuring the grey balance of the CMY ramp to see if it’s neutral.”

We speak to Kornit Digital’s Scott Walton about the company’s unique waterless printing technology and how it’s answering today’s manufacturing and sustainability challenges.

Digital fashion and textiles: the next challenges