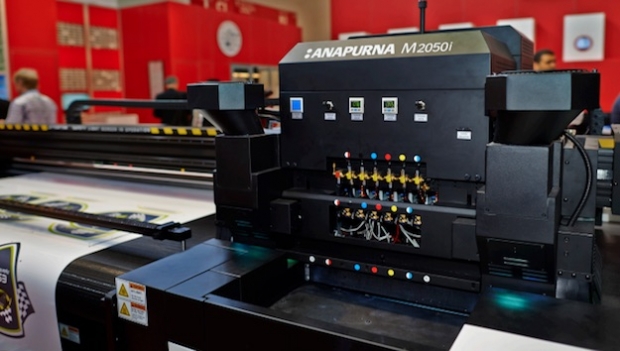 Printheads are a key component of any wideformat printer, so it’s important to understand how they work.

There are many bits of technology that go into making a large format printer, but arguably the printhead is the beating heart of the machine. It is the thing that pumps the ink directly to the media and it’s the printhead that determines the defining characteristics of the printer.

It dictates the type of ink the printer uses and the resolution, so the heads play a pretty big part in the overall image quality and the printer’s productivity. This is why vendors will often release new versions of their printers as new printheads become available.

Most inkjet printers use drop on demand (DOD) printheads, where each drop of ink is generated only when it’s needed. There are two main techniques used in DOD wide format printing engines: thermal and piezo-electric. In both systems the trick is to create enough pressure to force some ink through the nozzle.

The pressure must subside almost immediately, so that some of the ink is drawn back to the nozzle causing an individual drop to form, rather than having a continuous stream of ink flowing out through the nozzle.

Thermal printheads, as the name implies, heat the ink within the ink chamber until it vaporises and creates a bubble and forces a drop of ink through the nozzle. The main drawback of thermal is that it is mostly limited to water-based inks. It has been widely used by Canon for its ImagePrograf range and by HP for its DesignJet wide format printers.

HP has also developed water-based resin inks, better known as latex inks, for use with its thermal printheads. Another issue with thermal heads is that they have a very short life span and are usually replaced alongside the ink cartridges and treated as a consumable item.

However, the most commonly used DOD technology is piezo-electric as is used in the Mimaki UJF-6042. A voltage is applied to a piezo crystal to change its shape, so that it expands and pushes against the ink chamber within the printhead. Some printheads do still use a piezo crystal actuator but there are other variations now, such as using a sound wave. 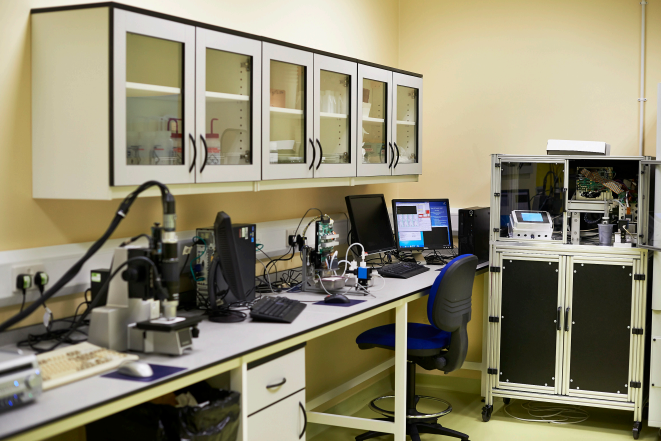 Ricoh's Inkjet Test Centre lab where inks are tested to see how they react with Ricoh's printheads.

The basic principle remains the same: when a voltage is pulsed through the actuator it changes shape, forcing a drop of ink from the ink chamber and out through the nozzle. This approach works with a wide variety of different inks including solvent and UV curable inks. The printheads can have a reasonably long life – up to two years in some cases – but they are more expensive than thermal heads.

The actual size of the ink droplet can vary considerably, with some having a tiny drop size of just three picolitres and capable of reproducing very fine details, particularly on small text and intricate patterns. Others such as the Fujifilm Acuity Advance HD2545 use a much larger drop size, typically up to 42 picolitres, which lets them put a lot of ink down quickly, useful for a high production printer.

The simplest approach is to use a single fixed droplet size, which is usually referred to as binary. But it’s easier to optimise the printer for different applications by using multiple drop sizes, a practice known as greyscale printing. There are a number of advantages to using greyscale printing.

Firstly, mixing bigger and smaller dots makes it easier to deal with gradients and subtle tonal shifts, such as in a skyline. It can also lead to reduced ink consumption, partly because some of the dots are quite small, but also because it’s easier to get smoother gradients with four colours without needing additional colours.

There are several different greyscale approaches. Some printheads eject different volumes of ink to make different sized droplets. Others eject the same amount of ink, but vary the frequency at which they fire the ink so that the different drops merge in flight, or land at the same spot on the media to form larger drops.

Greyscale printheads can be slower, and as they are more complex they can also be more expensive than their binary counterparts. However many wide format printing devices use some form of greyscaling, with anything from three to seven different drop sizes being quite common now.

Traditionally inkjet printheads cover only a very small part of the printable area and must scan back and forth to print a complete line. This ensures that any gaps are filled in, thereby generating quite high resolution images from relatively low resolution printheads. But this also takes time so clearly the easiest way to speed up a printer is to reduce the number of passes, with the holy grail being just a single pass.

In recent years single pass inkjet printing has become quite common for both label and document printers and many vendors privately believe that it’s only a matter of time before we see single pass wide format printers. The main issue is the cost of the printheads, with only the very expensive machines such as Fujifilm’s Onset having enough printheads to cover the full width of the bed. Even these still use several passes to achieve reasonable print quality. 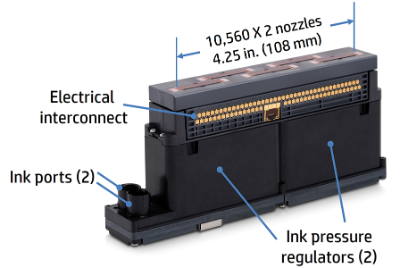 HP A53 Printheads with twice as many nozzles as its predecessor use large and small ink drops to get finer color resolution inside the gamut of HP A50 Pigment Inks.

Memjet has developed relatively low cost single pass printheads for wide format use, having stitched five of its heads together for a 42ins wide print engine. The actual heads are 220mm wide and capable of 1600 dpi resolution, with the latest version, codenamed Aspen, capable of running at 68mpm.

These printers are incredibly fast but for now this technology is limited to waterbased inks, ruling it out for outdoor applications. Instead, the Memjet-based printers are mainly targeted at the CAD graphics market though Memjet is developing a version of its printhead that will take solvent inks as well as a newer design that would be suitable for other ink types such as UV-curable.

It is tempting to assume that printers that use the same printhead will have identical performance. But the heads can be tuned to satisfy different needs so that although the physical characteristics will remain the same, there will be plenty of differences. Thus each vendor could use their own electronics to drive the printheads, which being analogue need a digital signal in order to fire the ink.

Also, individual inks will have to be optimised for each head to ensure, for example, that the inks don’t corrode or otherwise damage the heads. The inks must also have the right viscosity so that they can form droplets that eject accurately from the heads.

Finally, it’s worth noting that most printheads only really fail when they become clogged, usually with dried ink. A rigorous approach to cleaning them can save a fair bit of money both in head replacement costs and keeping the machine in service.